SIMENON SIMENON. A DUEL WITH NEWSPAPER ARTICLES AND LETTERS 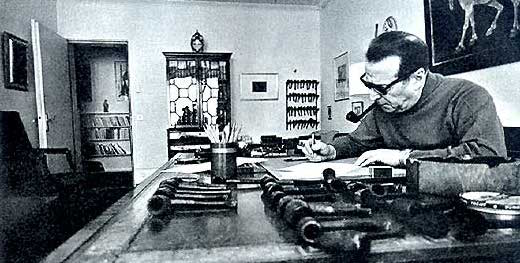 Simenon, who was a former journalist, often uses newspaper accounts in the course of his stories. Not only does he do this in his novel The Hatter’s Phantoms / The Hatter’s Ghosts, but he also provides responses to their editorial content in the form of letters, made up with words and letters cut from the same newspaper glued onto sheets of white paper.
The articles come from Jeantet, a 19-year-old local newspaper reporter—a teenager like Georges Simenon when he started out as a reporter. The letters come from sixtyish Léon Labbé, a serial killer in the same locale. Simenon dramatically juxtaposes these two antagonists in the local café, where they spend time among other regulars during late afternoons and early evenings. Practically side-by-side, the reporter works on his writing while the killer sips drinks and plays cards. Of course, only the latter appreciates the irony of the situation.
Jeantet is “patient” but “hotheaded.” Actually, he “was conducting a passionate inquiry about the assassinated old women” and “had even thrown a kind of challenge to the police.” In contrast, Labbé is “patient” but “calm.” Indeed, “despite all he had in his head,” he “had succeeded in never forgetting a thing, not even the smallest detail. Otherwise, in fact, he would have been lost.”
At the time the novel opens, their exchanges had already become “a habit, almost a tradition” in the 20 days since the killings began. The victims were all old women and five in number so far. Here is the sequence following each murder: Jeantet publishes his newspaper piece. Labbé reacts with his pieced together letter. Jeantet dutifully publishes this letter along with some reactive commentary, and the cycle repeats.
These skirmishes continue in a strung-out duel. Jeantet details and provokes: A dangerous madman wanders through the village. And Labbé denies and rebukes: “No, monsieur, there is no madman. Don’t talk about what you do not know.” Or other times, Labbé disagrees and explains: “You’re mistaken, young man. I am not a coward. It’s not out of cowardice that I attack old women, but out of necessity.” As Jeantet persists, an aroused Labbé expands on the “usual” letter. One is particularly verbose in 19 lines. “One will still say and write that I am a nut, a maniac, a sadist, an obsessive, and this is not true. I do what I have to do” is merely the opening.
Jeantet’s aggressive “reasoning” and “affirmations” cause Labbé great “irritation” with the result that the “meticulous” man, while burning up the paper clipping evidence, makes an important mistake. A tailor in the café naturally and reflexively picks a bit of paper with two cut out letters from the hatter’s trouser cuff. Both immediately understand its “importance,” but its discoverer is too “scared” to act upon his knowledge whereas the discovered is “quite satisfied” since “he was too alone before.”  Indeed, the emboldened madman advances with another boastful letter: “There is only one more on the list. This will make exactly seven. All the investigations will change nothing. The proof, young man, is that I am now announcing to you it will be on Monday.” Accordingly, the “not stupid” reporter issues a timely alert—“Doubtless out of bravado, the individual who is terrorizing the village […] has announced another murder for today”—along with some protective recommendations for his readers.
When the man running amok fails to carry out his promise, the man chronicling his crimes crows, “For the first time, the assassin did not accomplish what he had announced,” and attacks the killer in an “entire column of suppositions. Bluff? Illness? Fear?” as if the young reporter knew these additions “would darken his mood.” Although these accusations tempt the thwarted madman “to let himself get caught to explain the truth, to bring them proof,” he rapidly deteriorates into insanely strangling two young women—separated victims well outside his originally targeted group of seven old women, all long-term friends—in quick succession.
Earlier in the case, after consulting “a renowned psychiatrist,” Jeantet had projected the serial killer “will only stop when caught” with the added caveat “unless he kills himself.” Labbé had countered with “I will not be taken. I will not kill myself.” But, in the end, “the little boy”—for whom the angry man had “acquired a kind of affection” since he had “given him the chance to discuss his own case”—proves to be correct. In point of fact, the madman calmly and willingly surrenders to the police.