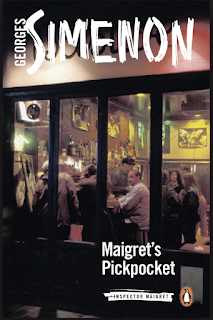 Maigret’s Pickpocket, Penguin’s English translation of Simenon’s Le Voleur de Maigret will be available through Amazon.co.uk as of April 4, 2019 in both paperback and Kindle editions. Fortunately, delivery to the USA is available because the release date for the paperback and Kindle editions through Amazon.com is not until December 3, 2019.
April 4, 2019 holds as the release date from the following other Amazon sources: Australia Kindle; China paperback; France paperback and Kindle; Japan Kindle; Germany Kindle; Italy paperback and Kindle; Netherlands Kindle; Spain paperback and Kindle.
December 3, 2019 is the release date from these other sources: Australia paperback; Brazil Kindle; Canada paperback; Germany paperback; Japan paperback; Mexico paperback and Kindle.
No date of release is available for India.
Le Voleur de Maigret originally appeared in 1967. The first English translation came out as Maigret’s Pickpocket from four different publishers in 1968. Seven subsequent editions, with some entitled Maigret and the Pickpocket, followed through 1996. The translator for all was Nigel Ryan, and the translator for this new Penguin edition is Sian Reynolds.
Be aware the ISBN-13 for this most recent edition is 978-0241304174, which should facilitate searching for this exact book from various other sources.
The original work was the 94th in Simenon’s order of publication, and this work is the 66th in Penguin’s modern series of translations.
Here’s the enticement: a young man on a bus steals Maigret’s wallet, but his brand-new shoes are so painful he is incapable of running after the thief. The next day, the wallet arrives in the mail and the pickpocket telephones to demand a face-to-face private meeting away from the office. The intrigued Chief Inspector agrees, and the mysterious man leads him to an apartment. There, a nauseating odor and carrion flies surround a woman’s body….