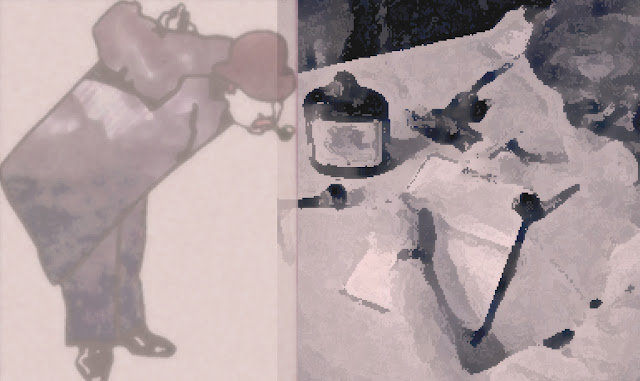 "Basically, there is nothing more similar to a novel than a police investigation." This sentence that Simenon said to Roger Stéphane in 1953 may be the key to understand why, to switch from popular literature to "true" literature, Simenon chose the detective novel as an intermediate phase. Considering that in his production from about 1920 to 1930 Simenon was writing on command, and had to try almost every literary genre, he could then have chosen to go on with sentimental novels. In those too he could have deepen the psychological depth of the characters, and tell stories about human passions, such as he would do afterwards in his "romans durs".
He could also decide upon travel stories, once he had experienced travelling all around the world; there too he could have developed a gallery of various characters coming from all corners of the world… a kind of preparation to his famous "search for naked mankind".
Yet he chose to write detective novels. The quotation we made above is a good explanation, particularly when referring to Simenon's detective novels. We could say that the investigations he told appear to be a mirror of how he wrote his novels. His Maigret has no method, or rather his method is to have no precise method. Just like Simenon when he began to write with a vague idea for starting and some notes on his yellow envelopes. He never knew where the story and its protagonists would take him along, and he didn't imagine which would be the end of the novel.
Every time Simenon lived a creative trance, all unconscious, as he entered his "état de roman". The Chief Inspector, when he arrives on the scene of the crime, doesn't do anything. He looks around him, observes people, listens absently to what the other policemen are saying, and if someone asks him what he is thinking about, he answers: "Nothing." A way to avoid being disturbed, because in this phase in reality Maigret is not doing anything, but, as his creator said, he is impregnating… He's soaking up with the mentality of the place, with the way of life of the locals, with the dynamics that take place between the victim's family members, friends and colleagues. He doesn't need to understand something. He must come to think like the victim and then like the culprit. It's the same proceedings that the novelist will use when he enters the protagonists' skin in his novel.
There are other common traits. The Chief Inspector Maigret's sentence, "to understand and not judge", comes from Simenon's deep conviction that Man is not really responsible for his actions, because he's bound by an inescapable destiny. The novelist also thinks that judges are not the best for judging, and that psychoanalysts should preside over the courts, rather than magistrates. And it's not by chance that Maigret is surnamed a "mender of destinies", because he believes that justice, with its instruments, cannot understand and therefore cannot be right, and then, when it's possible, he acts so that events take a different turn.
In conclusion the detective in Maigret style appears to proceed just like Simenon would proceed in the writing of his future novels. Thus the "semi-literature" of the Maigret novels were not only a literary preparation, but a real and true paradigm of the upcoming method used to write the "romans durs".