SIMENON SIMENON. DARD AND SIMENON, BIRDS OF A FEATHER? 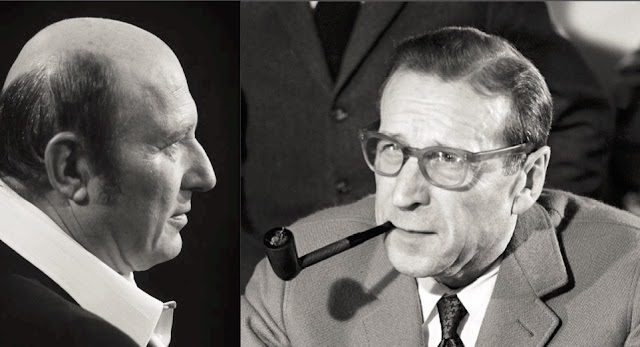 A writer with prominence in the Francophone world approaching that of Georges Simenon, Frédéric Dard invites comparison for multiple reasons: he was a prolific writer with an enormous number of publications. The content of his mysteries, thrillers, and detective stories is similar. His writing style is variably different and alike. Detective San-Antonio is as iconic as Chief Inspector Maigret.
Dard wrote at least 284 books and sold more than 200 million copies in France alone. Exact figures are elusive because Dard used 17 known pen names. His popular San-Antonio series maxed out at 175. There are 28 of his romans de la nuit (literally ‘novels of the night’). Unfortunately, English translations of his works have been few and far between, but this year Anglophones get a chance to compare the two authors, thanks to Pushkin Press.
Googling uncovered just two of the ‘night’ series and nine San-Antonio novels prior to 2016. Reading the latter works in French provides one explanation for this dearth. They resist English translation because of their neologisms — Dard basically created his own language. In fact, he invented so many words and expressions there is a French San-Antonio dictionary with 15,000 entries in 631 pages. The New York Times claimed he “used 200-odd different words for men's sexual anatomy and another 200-odd for women's.” The British author James Kirkup said, ''His prose style is so individual, so slangy and often so very improper in its demented vocabulary that I wonder how anyone could transform it into acceptable English.''
In contrast, Pushkin editor and Dard translator Daniel Seton states “the ‘novels of the night’ are less reliant on that kind of wordplay, although his use of language is still very effective in them.” In fact, David Bellos, who has translated both authors, refers to “the extraordinary efficiency of their language. Using a very small vocabulary and a limited grammatical repertoire, they create characters, settings, atmospheres and narrative suspense out of almost nothing. Their styles are so unpretentious, stark and simple that you read these things as fast as they were written – and there’s a great deal of art in that.”
Indeed, their stylistic considerations may have traveled on a two-way street. Dard was Simenon’s “close friend” although 18 years his junior, according to theguardian.com. The publisher of the imminent English translations, Pushkin Press states that Dard was “greatly influenced by the great Georges Simenon. The two entered into a correspondence when Dard was just 16 years old. A mutual respect developed between the two, and eventually Simenon agreed to let Dard adapt one of his books for the stage in 1953.”
Pushkin’s first publication, Bird in a Cage (ISBN 9781782271994) is available from Amazon.uk right now and from Amazon.com as a pre-order for August 16th. Anticipate The Wicked Go to Hell in September and Crush in November. The Gravedigger’s Bread and The Executioner will follow. With five San-Antonio novels already under my belt, I expect to post a comparative review of Bird in a Cage soon.