About a plan to share some insights into a complex personality. 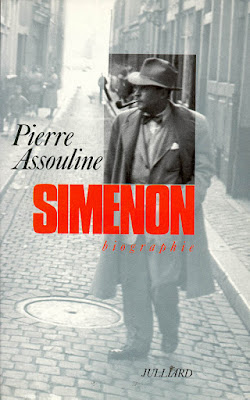 I just started reading an extensive biography about Georges Simenon ― a task avoided for years out of fear I wouldn’t like the man anywhere as much as I liked his works. However, since I am now presuming to write about Simenon for his fans, practicing or merely potential, it behooves me to know much more about him. Whether interpreting or merely introducing his works, both efforts require that the writer be informed.
Among biographical options for such a project, Pierre Assouline’s Simenon seems the most attractive for two reasons in particular: its reputed thoroughness and accuracy. That the official Simenon website (http://simenon.com/#) is using it to develop a timeline of his life supports this choice. In fact, the book’s epigraph quoting Simenon on biography sets a high bar for Assouline’s own scholarship: “When one writes a biography, either one really tells the truth or else one really makes the biography wrong.”
My plan is to work through Gallimard’s 1996 edition of a 1000+ pages in French, step by step, sifting out tidbits that might guide Anglophones to better understanding the author and his works. I’m not thinking exhaustive or authoritative. I’m simply thinking informational ― and sometimes quizzical.
Below, listed alphabetically by subject, are some issues to explore, already commented upon by others:
Alcoholism: Georges Simenon had the not very enviable distinction of being both a French-type and an American-type alcoholic, switching from the former to the latter in middle age. ―Donald W. Goodwin, MD
Carnality: Somehow, as well as churning out 393 novels during a highly successful 53-year career, the Belgian author also found the time to make 10,000 sexual conquests. ―Wendy Leigh and Emily Fairbairn
Collaboration: Some thought Simenon was a collaborator, and he spent a number of years in the United States as an indirect result. ―Bill Alder
Egotism: Simenon portrays himself as more sinned against than sinning. ―Ann Arensberg
Exaggeration: Simenon was a relentless self-mythologizer. ―Richard Rayner
Greed: Nevertheless, the widely held view that he wrote primarily for money infuriated Simenon. ―Joan Acocella
Homophobia: To know more, Gide cornered him during a cocktail party. Homophobe, Simenon detested that. ―Sorin Raphaël
Misogyny: His second wife, Denyse Ouimet, suggested that “he had contempt for women,” [but] Simenon refuted charges of misogyny. ―John McIntyre
Racism: He is also an unqualified antisemite. ―Norman Lebrecht
Religion: It’s not that he rejects religious belief: he doesn’t even consider it. ―John Gray
Sanity: He wrote from a compulsion bordering on psychosis. ―Phillip Kay
I will be looking to Pierre Assouline for the truth!