SIMENON SIMENON. SOMEONE PULLS “THE COMMUNICATION CORD” AND TRIGGERS A MYSTERY

The Little Doctor takes another case and puts his life in danger. 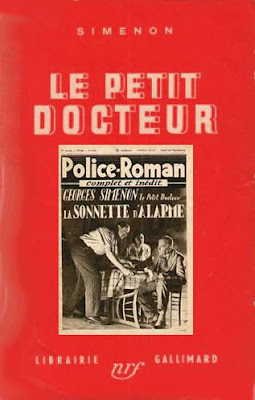 According to Simenon, the 11th adventure in The Little Doctor collection came “closest to the notorious ‘perfect crime’ dear to all criminologists.” A prudish religious candle maker, Etienne Chaput, was riding alone in an overnight train compartment with a seductive young woman he did not know. All of a sudden in the middle of the night, she pulled the emergency alarm cord and stopped the train at an isolated rural site. After lodging a complaint of sexual molestation against Chaput with the train conductor and leaving a false address with the summoned police, she walked off into the night and disappeared without a trace. Fearing scandal and worried about blackmail, Chaput hires doctor-detective Jean Dollent to get him out of the mess. Although Dollent doubts the truth of the story, he takes the case. As one has come to expect of him, he solves the mystery quickly, but not without running great risks and becoming very afraid in the process. Dollent begins his investigation by going to the precise spot where the train had stopped. He takes a room at an inn beside the tracks and makes up a fake story of his own to draw information from its two innkeepers. Surprisingly, they respond with what seem more like taunts than answers. In fact, they seem to be asking the questions of him, and Dollent gets the feeling he is slowly being drawn into a trap. Things become even more confusing and threatening when Chaput telephones him out of the blue and later on arrives on the scene in an apparent effort to get him to drop the inquiry. The frightened Dollent decides he must escape, but his car won’t start, so he flags down a truck and palms an already written plea for help to its driver.
Back at the inn, he submits to nervously playing cards and heavily drinking with what now looks to be a gang of three. After they pour him into bed, “drunk, drunker than he had ever been” (and drunker than Maigret ever gets), the doctor puts his finger down his throat and vomits up the booze. This trick, which he had formerly employed after “drinking bouts in his student days,” enables him to stay awake enough to overhear the treacherous three talking downstairs. They are plotting his murder and how to dispose of his corpse! Just as they start up the stairs to do the job, suffice it to say, his clever pre-planning pays off. Dollent downs a final brandy for the road and heads off with the souvenir sledgehammer meant to do him in. “It was the first piece for his display, the beginning of a collection!”
Herein, Simenon develops a complex story with more twists and tension than the previous ten in the collection. In the beginning, all seems rather predictable. There are pretty obvious explanations for the sudden train stop and unfounded accusations. However, the author gets trickier and trickier, putting his detective into escalating difficulty with his suspects seeming to gain the upper hand. “He saw, rather he sensed threats everywhere.” Flustered and frightened (in a way Maigret never is), Dollent feels he is caught in a flytrap. The reader, too, is unsure of the outcome, but Simenon presents a satisfactory, if serendipitous, solution.