SIMENON SIMENON. THE MISSING PERSONS IN MODIANO AND SIMENON 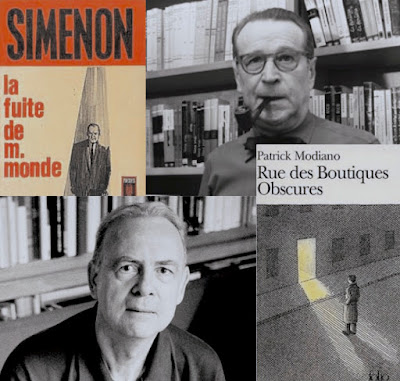 Critics often make these two authors sound like counterparts. In fact, two novels in particular invite such a comparison because they both focus on a single unique theme: a missing person. In Modiano’s Missing Person (Rue des Boutiques Obscures) and Simenon’s Monsieur Monde Vanishes (La Fuite de M. Monde), the male protagonists are actually searching for themselves. However, as the reader follows them in their hunting, an important difference stands out: one man is looking back and one is looking forward.
In the Modiano, a long-term amnesiac and private detective, Guy Roland loses his job and uses this new freedom to try and find his identity, working from his former agency’s years of files. Multiple mail addresses, phone numbers, and newspaper articles lead him to strangers who seem to have known some of his friends. They, in turn, provide him with enticing clues, including old anecdotes, letters, and photographs. Hoping to restore concrete memories, whether lost or repressed, and sometimes seeming to succeed, Roland pursues the histories of these mysterious characters with differing names, who may in fact have been him, through France, Switzerland, and the South Pacific. Thwarted again, he heads for Italy….
In the Simenon, a well-to-do and wealthy businessman, Nobert Monde discovers that “everyone had forgotten” his 48th birthday. Withdrawing his liquid bank assets and shaving off his mustache that very day, he leaves Paris where he had been “frozen” for his entire life and, abandoning his routines, house, family, and company, he escapes to southern France. Intent on severing any and all ties to live as a free “man on the street,” Monde surprises himself when he leaps to rescue Julie, a young bargirl, from suicide. Together, they plunge into a life of debauchery and dissipation, but even though he loses his hefty bankroll and his face its healthy color, he acquires the look of  “mysterious joy, a sort of perverse delight.” Through this rock bottom existence with airy and loose Julie, the opposite of the rigid, tightfisted second wife he left in Paris, Monde realizes he is a much better, more worthwhile person than others thought.
When another “lost animal” surfaces suddenly, Monde surprises himself again by leaping to her rescue. A hopeless drug addict, she happens to be the first wife he had divorced long ago. “Suddenly seeing life in another way, as if aided by some extraordinary x-ray vision,” Monde brings her to Paris for rehabilitation. But he doesn’t return there because of her; he goes back for himself. With “a cold serenity” in place of his pre-flight malaise, Monde resumes his daily ways.
At the beginning of these two novels, both men realize they did not fully exist. In looking for himself, Monde didn’t know “where he was going or what he would do” and neither did Roland. During the story, while striving to find out who they were/are, Monde draws closer and closer whereas Roland keeps on falling short. At the end, the reader doesn’t know for sure what the future holds for the two. Yet, it seems Monde has been reborn whereas Roland will continue dead forever.