SIMENON SIMENON. MORE ON DARD AND SIMENON AS BIRDS OF A FEATHER 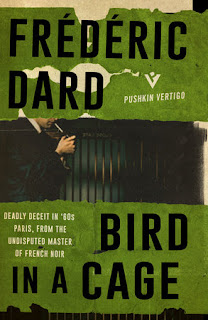 If I had not known Frédéric Dard was the author of Bird in a Cage while reading it, I would have thought Georges Simenon was the writer.
Six years after his wife’s death, Albert finally returns to Paris and wanders through his old neighborhood where he buys a Christmas ornament that ‘abruptly revived the past’ and eats in a fancy restaurant where he spots a women who evokes his wife. The sensuous and seductive beauty invites his attention, they go to the movies, they hold hands, and they end up at her house. After a few drinks, the woman reveals she is unhappily married and suggests they go to Albert’s apartment, presumably to make love. Before they leave, Albert hangs his ‘bird in a cage’ ornament on her Christmas tree as a “secret” thank-you for his good luck.
Once there, however, the accelerating amorous “spell is broken” by two startling red spots (blood?) on her sleeve. This disappointment drives them back to her apartment, where even stranger findings greet them: she finds her husband’s blood soaked body in the living room and Albert notes his symbolic birdcage “offering” is gone from the tree. They panic and flee, but eventually return, resolved to deal with the incriminating circumstances. Now, the body is gone and the ornament is back! This startling whodunit releases a whirlwind of unexpected twists and spirals the reader to a final explanation but an unsettling resolution.
So, in what ways, if any, is this Dard roman de la nuit similar to a Simenon roman dur?
The protagonist is reminiscent of many of Simenon’s characters. Albert presents as a rather ordinary figure, but one who is at once a victim of society and responsible for what he does—and what happens to others. He is bewildered and confused like Edouard in The Family Lie and Célerin in The Innocents. Yet he behaves like Stan in The Outlaw, Jean in The Widow, and Frank in Dirty Snow.
Dard’s writing style also parallels that of Simenon. The prose is clear. The vocabulary is simple. The sentences are short. The time frame is short (24 hours). The book is short (137 pages). The plot is clever, intricate, and well constructed. The ‘bird in a cage’ formulation is proof of this, for Albert is himself a caged bird. The original French title Le monte-charge translates literally as The Freight Elevator, and such a device cages Albert each time he leaves or reenters the crime scene. Indeed, yet another cage issue, a component vital to the intrigue, is best left for the reader to discover.
The drama builds steadily from the first page. Dard withholds information and only releases details in a tantalizingly gradual fashion. For example, we don’t learn the mysterious woman’s first name until the last page. We sense things will not turn out well as Dard pulls us down a sinister path with glimpses of hope along the edges to the unpredictable ending. My conclusion is that this first roman de la nuit compares favorably with the forty-five romans durs I’ve read so far. Imagine: there are only twenty-seven left to go!