A Simenon fan finds out about Maigret’s birth. 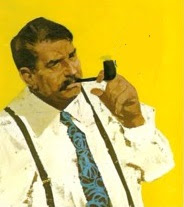 We’re reached chapter six in the biography Simenon, whose title Waiting for Maigret suggests the Chief Inspector and the first novel are about to surface.
[Why am I excited to learn whatever Assouline has to say about Maigret? Here’s a brief explanation: a native-born American, I accidently studied French in high school, only to thoroughly ignore it after that. I was well into middle age when I spotted a short Zola novel on a take-it-or-leave-it shelf at our town dump. To my surprise, some understandable French phrases jumped out as I flipped through its pages. Soon thereafter, again from the same location, I took home a Maigret: The Yellow Dog. That’s how an interest in reading French literature got cooking again, but the icing on the cake came at a small town library book sale―coincidentally about 13 road miles from Simenon’s Shadow Rock Farm in Lakeville, Connecticut. I found five Maigrets for five cents a piece, a mere 25¢ being a great bargain for a thrifty Yankee like me. And so, I shifted into high gear and traveled over the years with Maigret and Simenon throughout Paris, France, and beyond. Now, with 103 Maigret works and 45 romans durs under my belt, one could classify me as a Simenon fan. The near insanity of writing a Maigret pastiche in French and then translating it to English is sufficient proof of that.]
In 1928, Simenon decided “to set sail both literally and figuratively” from Paris, for he “was persuaded the most favorable place for creative work was where one spent just two weeks.” So, he picked up a 13-foot motorboat and a canoe to tow behind it with the necessary camping equipment for himself, Tigy, Boule, and Olaf, his Great Dane. (“It was out of the question to go to a hotel except to visit a brothel.”) Simenon planned to learn about boating “on the job” while navigating France’s extensive canals and rivers. Six months later, he upgraded to a 33-foot boat, voyaging for two years on the seas north of France as far as the top of Norway.
While traveling, the boater never stopped writing, producing as many as 80 pages a day. According to Simenon, this was when, in September 1929, he wrote his first Maigret story, Pietr the Latvian (first published in 1931). “One sunny morning… …I began to see the powerful, impassive mass of a man take shape who, it seemed to me, would make an acceptable inspector….” However, according to Assouline, this “official version of the birth of the myth” was “not completely in accordance with fact.” Indeed, in the summer of 1928, while writing a novel featuring a different protagonist, Simenon referenced a “vague Maigret character.” In 1929, in The House of Anxiety, “the most complete prefiguration” of Maigret showed up, “inaugurating the adventures and investigation of Chief Inspector Maigret.” In 1930, in Night Train, Chief Inspector Maigret appeared in his own right. Thus, Assouline asks: “Why did Simenon hold on to Pietr the Latvian as his first Maigret at all costs although that didn’t correspond with the truth?” The answer: “His determination, very early, very young, to want to construct a work and protect it with a legend.” Interesting? Yes. But after all, does it matter precisely when Maigret was born?