Anglophones get both a new book and a play at the same time! 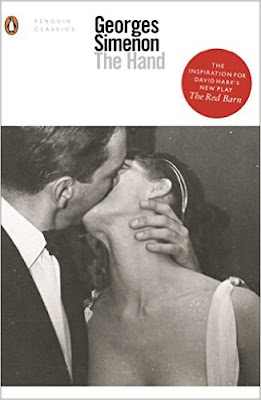 As of October 6th, a unique opportunity opens up for Anglophones who enjoy Georges Simenon’s works. The intense psychological novel, La Main, has spawned some brand new stuff: an English translation and a theatrical adaptation.
The original novel: ordinary rural lawyer Don and fancy big city adman Ray take their wives to a party where Don spots Ray making love to a beauty he just met moments before. Don, who “had always stayed on the right path,” gets drunk “for the second time in his life” and, on the way home in a blinding blizzard, strands the car in a snowdrift. After a struggle on foot to the house, they discover Ray has disappeared. Pretending to go out in the night to search for “oldest” and “best” friend, Don instead chickens out and holes up in his red barn where he spends hours in thought. As “I killed him” repeats over and over in his head, Don evolves from cowardice through guilt to envy to hate and finally to “diffuse joy.” Cooped up with their wives in his snowbound farmhouse for days, Don recognizes as he covets Ray’s wife, Mona, that he does not love his wife, Isabel. For 17 years, he had pretended to be “getting along well” with Isabel, whose “character was to behave perfectly,” but now, with Mona, who was “a true female,” he “yearned” for her “hot animal tenderness.” Things quickly and simultaneously escalate (Don and Mona start making love) and deteriorate (Don and Isabel stop communicating). With his dead mother haunting him, his living father criticizing him, and Isabel “pushing him underwater,” paranoid Don teeter-totters until Mona “cuts the cord.” Read the book or see the play to find out what happens!
The second translation: The original French novel in 1968 triggered a relatively quick English translation in 1970, The Man on the Bench in the Barn by Moura Budberg. Now, 36 years later, Penguin presents The Hand in translation by Linda Coverdale. Amazon.uk is offering the work in both paperback (192 pages) and eBook formats. Unfortunately, Amazon.com is not yet listing it, but fortunately, the UK product will be available for USA delivery. At least, the Amazons in France and Italy are on board for the October 6 release date and there may be more sources world-wide.
The new play: 48 years after La Main and 26 years after the German television movie (Das zweite Leben, written by Uwe Wilhelm and directed by Carlo Rola), The Red Barn premiers at the National Theatre in London, England. Written by David Hare and directed by Robert Icke, it is expected to run until January 17. Adapting the novel to the stage is a tough and tricky undertaking. Both writer and director have to cope with its first-person narration and short four-month time frame. Protagonist Don talks mostly inside his head, spewing a flood of past events, self-interrogations, and future projections. Isabel talks mostly with her eyes and Mona mostly with her body. The scenographer’s challenges include a massive snowstorm in the dead of night, a body at the bottom of a huge slippery rock, an ice-cold, lonely barn in the country, and a “warmer, more intimate” apartment in the city. In any case, the ending will certainly be, as the saying goes, dramatic….