SIMENON SIMENON. HIS “ROMANS POPULAIRES” IN THE PULP FICTION GENRE

On one of his best: The Man with the Cigarette by Georges Sim 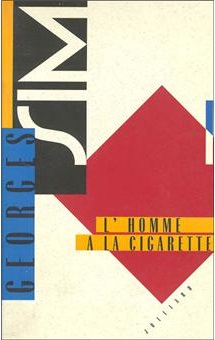 Assouline’s Simenon talks at length about Simenon’s numerous romans populaires, the pulp fiction novels that characterized his early output. Considered “Simenon before Simenon” or proto-Maigret works, they were often ‘hidden’ under pen names. It seems The Man with the Cigarette (L’homme à la cigarette) stands out as one of the best, if not the best, in the series, making it a good test read for this genre. Unable to direct you to an English translation, I offer the summary below to provide a sense of this work and, presumably, the others in Simenon’s repertoire.


Printed on cheap “pulp” paper in magazines during the first half of the 20th century, pulp fiction refers to a literary form that presented fantastic, sensationalist fiction for the entertainment of the masses. Their vividly colorful covers with beautiful women in distress and handsome men intent on rescue were effective, provocative come-ons to this (still) popular genre. My favorite American pulp writer is Raymond Chandler. Francophones should consider Gaston Leroux.
First appearing in 1931, L’homme à la cigarette was one of Simenon’s last romans populaires and perhaps was highly regarded as such because, by then, the author had matured within this genre. Notably, in 1999, it was republished in Simenon Avant Simenon, along with four other novels, two by Georges Sim and two by Christinan Brulls (a combined pen name linking his brother and mother).
What is it about? A millionaire playboy is murdered and the evidence points to a drunken sailor until a swashbuckling chameleon snatches the accused from the clutches of a stubborn detective in pursuit….
Who are the players? Simenon creates an idealized “demigod” for his protagonist: J.K. Charles. This ultimate hero―ever-present cigarette in mouth, a porcelain tube filled with dynamite―this man of many talents is a world traveler, mariner, linguist, author, art critic, socialite, bandit, mind reader, secret agent, amateur surgeon, and womanizer. “Absolutely sure of himself,” he is “someone who knows what he’s doing, what he wants, and whom no obstacle can stop.”
Simenon composes a simple, modest man as his antagonist: Inspector Joseph Boucheron. Vaguely proto-Maigret, he is likable and appealing, sensitive and sentimental, intuitive and instinctive, patient and obstinate. Despite being outfoxed by Charles time and time again, Simenon’s dogged detective doesn’t quit, eerily forecasting Maigret with his “I’m not thinking anything yet.”
What does their dueling involve? To cite just a few events, we see gold coins bitten in half. Glasses chewed and swallowed. A razor disarming. A knife attack. A damsel in distress: bare breast, blood, tears, and all. Robbery. Kidnapping. Shootings. Murder. Suicide. Fingerprints, phone tracings, and skeleton keys. Stakeouts, manhunts, car chases, and escapes.
How does this melodrama add up? Its original 126 pages of straightforward, already Simenonien prose gives us atmosphere, adventure, suspense, surprise, romance, love, adultery, marriage and, unlike the so much later romans durs, a happy ending.