SIMENON SIMENON. A CHIT OF A GIRL: A NOVEL, A MOVIE, A LOCATION

Some thoughts and information on a novel and its setting 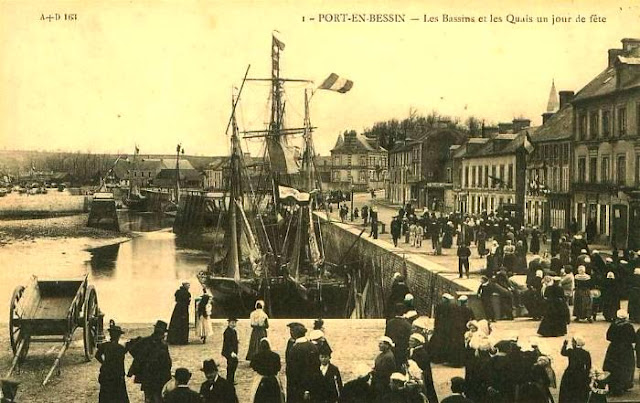 A post in Simenon-Simenon on 3 July drew our attention to the death aged 84 of Nicole Courcel, the actress who played the role of Marie Le Flem in Marcel Carné’s cinema adaptation of Simenon’s La Marie du Port. Although the film version of La Marie du Port appeared in 1950, the novel on which it was based was written in October 1937 and published by Gallimard the following year. According to Assouline’s biography of Simenon, the author sold the film rights for his novel in 1938, along with those for La Maison des sept jeunes filles, for 80 000 francs. The reasons for the long delay between the sale of the rights and the appearance of the film are rather obscure and do not seem to be related to the German occupation of France as this period was the most prolific to date in terms of cinema adaptations of Simenon’s novels.
The choice of the extremely attractive Nicole Courcel for the role of Marie is not immediately obvious from the physical descriptions of Marie: flat-chested but with a rounded stomach, straight, badly-combed hair, a pale face with a narrow mouth whose expression was always, sulky, sad or scornful. Clearly the contemporary cinema’s idea of a leading actress did not necessarily accord with the portrait sketched by the novelist! By the same token, the choice of Jean Gabin for the role of the central male character, Chatelard, seems to have been influenced more by the commercial drawing power of the actor than by any particular resemblance to the character in terms of age or appearance.
The ‘port’ of the novels title is the Norman fishing port of Port-en-Bessin and although the greater part of the film was filmed in the studio, a number of scenes were shot on location thereby helping to give a greater sense of place to the action. It is well known that virtually all of Simenon’s novels and short stories are set in locations in which he had lived or had visited. Of the nineteen Fayard Maigret stories, only Le Fou de Bergerac takes place in a location with which the author was not personally familiar and, significantly, Maigret spends the greater part of the enquiry in his hotel bedroom rather than at large in the town. Just as the composition of La Tête d’un homme took place at the hôtel Aiglon, boulevard Raspail, in the 14th arrondissement of Paris, from which Simenon could see from his window the Montparnasse locations of the novel, so La Marie du Port was also written in a hotel room from which the author could directly observe the settings he was describing, thereby adding to the immediacy and force of the narrator’s descriptions.
The hotel in question was the hôtel de l’Europe, situated on quai Félix Faure, opposite the swing bridge separating the inner and outer ports. This area of Port-en-Bessin was destroyed during the allied landings in Normandy in June 1944 and the site of the hotel is now occupied by a crêperie-pizzeria. The café de la Marine, where Marie works, was modelled by Simenon on the café du Grand Quai, close by the hôtel de l’Europe, and following the success of the film the proprietor of the café added a streamer announcing ‘A la Marie du Port’ to the establishment’s signage, and this latter was kept as the name of the bar-restaurant which succeed the café.
It is hardly surprising that the almost eighty years that have elapsed since the writing of La Marie du Port have witnessed major changes to the setting of the novel. However, the existence of a deep-water harbour at Port-en-Bessin has ensured the survival of a significant fishing industry and this economic activity which is the backdrop to Simenon’s novel continues to characterise the ambiance of the town today. With almost thirty active trawlers, Port-en-Bessin is Normandy’s premier fishing port and the seventh most important in France. Fishing stands at the centre of the town’s tourist activity with guided visits of the
The harbour arms, the swing bridge and the quaysides of the inner-port are still reminiscent of the scenes described by Simenon and the modern visitor can see the « maisons basses […] aux façades grises et aux durs toits d’ardoises », ‘’low houses with their grey facades and hard slate roofs’’.
Although the Port-en-Bessin of La Marie du Port may not have been preserved in formaldehyde, the survival of fishing as the determining economic activity of the town goes a long way to preserving the famous Simenonien atmosphere and if you have enjoyed Simenon’s novel a visit is highly recommended.

We welcome William. It 'a new author who will write posts for Simenon-Simenon. William is the author of an interesting book about Simenon "Maigret, Simenon and France," which we presented thanks to a post THE AUTHOR, THE DETECTIVE, AND THE COUNTRY by David P Simmons, 15 February 2016 .
Pubblicato da Maurizio Testa a 01:17