On the very first investigation by Chief Inspector Maigret 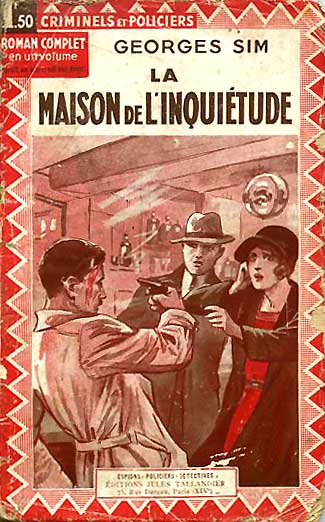 In his biography Simenon, Pierre Assouline contends the first full Maigret story is The House of Anxiety */La Maison d’inquiétude. In his opinion, this 1930 novel “inaugurates the adventures and investigations of Chief Inspector Maigret” and “is the very first true Maigret investigation.” What follows below is my personal tally of some features this first Maigret displays that become commonplace in the subsequent 103 works in the series. Plain and simple, the protagonist in The House of Anxiety is a well-fleshed out and readily recognizable Chief Inspector Maigret.
He is a very big man.
“Enormous.” “Weighty” “His fists were clubs.” Simenon often qualifies his parts as gros, an adjective variably translatable as big, large, or fat.
He drinks an awful lot. A marc at 8:00 AM, pints of beer during breaks, and three cognacs at 6:00 PM. For interrogations, he demands, “Have two pints brought up!”
He has distinctive personality traits (some softened in later works).
For starters, he’s grumpy, in fact, “naturally grouchy, which is common to many big/large/fat people.” He’s brusque. He “welcomed the flattery with the graciousness of a porcupine.” He’s rude. An associate knocking on his door is “welcomed with a salvo of swears.” He’s patient, repeating the stakeout of one house four times. He’s obstinate, tailing one suspect all day long well into the night. In contrast, he’s notably compassionate. For example, with “neither hostility nor resentment,” he forgives an assailant for breaking his pipe, one humanized for “having not left him for 12 years.”
He has a habitual investigatory method (one he will repeatedly deny). He’s asked, “Your opinion?” and he responds, “I don’t have one.” He relies heavily on observation (“The chief inspector was on her heels. He hardly knew if he still might want to question her. He was watching her.”) and on intuition (“Intrigued, he watched her as a phenomena, sensing something much more complicated than everything he had pictured so far.”). It is often “after he has divined the reason for [something]” that he acts, and thus deduction plays a lesser role in his method.
He goes into a trance (a frequent event in subsequent investigations.) “But suddenly he stands still, his look trained on empty space. He stayed that way for several minutes, lost in his thoughts…”
He has supporters (who become future mainstays). A wife―granted, she is only mentioned once and, then, only on the very last page. An associate―Torrence, the only one of the future big four. A “chief”―an anonymous figure at this point.
Certain props surround him (and become standards). The ever-present pipe: this particular one “had participated in 100 arrests.” The office stove: “He went and planted his back to the stove in a more or less ritualistic posture.” The velvet-collared overcoat and derby hat (both ultimately denied in his memoirs.)
But a few items do not appear after this first Maigret. He does not eat in the typical prominent way. He smiles “with that smiling tranquility habitual to him.” He even laughs “a big burst of laughter.” Indeed, his wife “dares to be jealous.” All never seen again!

*Anglophones owe it to Stephen Trussel for his translation into English, which is available for free on his website: http://www.trussel.com/maig/maison.htm
Pubblicato da Maurizio Testa a 01:58