SIMENON SIMENON. “MAIGRET AND THE RELUCTANT WITNESSES” COMES OUT MARCH / 1 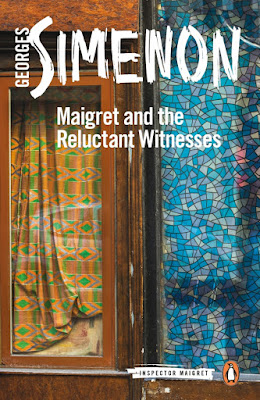 Maigret and the Reluctant Witnesses, Penguin’s English translation of Simenon’s Maigret et les témoins récalcitrants, will be available through Amazon.co.uk as of March 1, 2018. Both paperback and Kindle editions are being released.
The opportunity for delivery from the UK to the USA will appeal to some because a release date for the paperback edition from Amazon.com will be November 6. 2018. However, the Kindle edition will be available on March 1, 2018.
The March 1, 2018 release date also holds for the following Amazon sources: Australia Kindle; Brazil Kindle; Canada Kindle; France Kindle; Germany Kindle; India paperback and Kindle; Italy paperback and Kindle; Japan Kindle; Mexico Kindle; Netherlands Kindle; Spain paperback and Kindle.
Notably, May 28, 2018 is the release date for a paperback edition from Amazon in Australia.
The more distant November 6, 2018 date applies for these Amazon sources: Brazil paperback; Canada paperback; China paperback; France paperback; Germany paperback; Japan paperback.
Be aware the ISBN-13 for this new edition is 978-0241303856, which should facilitate searching for the book from various other sources.
Maigret et les témoins récalcitrants originally appeared in 1959. It came out in English translation in 1960 as Maigret and the Reluctant Witnesses. The translator then was Daphne Woodward, and the translator for this new Penguin edition is William Hobson.
The original work was the 81st in Simenon’s order of publication, and this work is the 53rd in Penguin’s modern series of translations.
This novel becomes interesting as the “witnesses” are identified as more than “reluctant.” Problems develop in false clues and missing evidence. In addition, Maigret conflicts with the younger examining magistrate in managing the investigation, and being bothered by people in superior positions, especially if they are younger, is not new for him.