About the powerful influence of children on Maigret, the man and the policeman 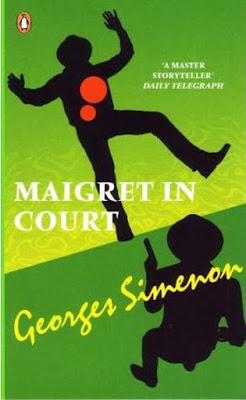 Maigret lost his only child. That little girl’s death seems basic to the affection for children he displays throughout the series, but nowhere do I recall the importance of children being so instrumental in his behavior as in Maigret in Court. Primarily because he finds another dead little girl, horribly murdered by “a killer who had not hesitated to attack a little girl, trying first to strangle her and then, nervous because she was not dying fast enough, suffocating her under some silk sofa cushions,” Maigret manages the case in a way seldom, if ever, seen elsewhere in his career.
Although a witness for the prosecution, Chief Inspector Maigret deliberately provides the court with testimony that leads to the defendant Gaston Meurant’s acquittal from charges in a “double crime.” Thinking the accused man is innocent and his promiscuous wife and her apparent lover are guilty,Maigret resumes the investigation. Believing “criminals who attack children unnecessarily are rare, and they fall into a well-defined category,” Maigret intuits Meurant does not fit into that group. And, once the detective acquires details about the married couple’s childlessness, “that shaped an entity in the view of Maigret who then, rightly or wrongly, fastened a rather important role to this matter of children.” That Meurant was “the type of man who wants to have children” and “hoped to have a family” convinces Maigret of his innocence. It seems “everything was possible, except for a man who wanted children so much to slowly suffocate a little four-year-old girl.”
At the same time, the detective senses the angry man’s growing “obsession” with getting revenge on the guilty pair and actually goads him on. “Had Maigret been wrong to talk to him brutally, tripping the spring that would have, sooner or later, let go anyway? Even if he had wanted to, the Chief Inspector would not have been able to act otherwise.” Thus, “Maigret acted in the heat of the moment, obliging Meurant to open his eyes all of a sudden, to finally see the truth in front of his face, and a different man had left his office, a man for whom nothing was more important than his obsession.” Given an “acquitted and not guilty Meurant,” the Chief Inspector realizes “somewhere out there was a free man who had slit Léontine Faverges’ throat and afterwards suffocated a little four-year-old girl, a killer with enough cold-bloodedness and cunning to send someone else to trial in his place and who had been on the verge of succeeding.” Maigret is fully aware Meurant is “following an obsession and capable of getting rid of anything that might stand in his way.” Nevertheless, he remains passive. In fact, by doing absolutely nothing to stop Meurant from achieving his goal, the Chief Inspector becomes an avenger as well, willingly but silently shouldering “a responsibility difficult to explain” to others.
Suffice it to say, Maigret follows the punisher step by step through telephone reports, but when all is over, he receives a direct “silent thank-you” look from the man. To my eye, the following citation applies to both Meurant and Maigret: “He was not rejoicing or feeling a need to explain or justify himself. It was a matter for him only. In his view, he had done what he had to do.”