On how the author packed these very short stories. 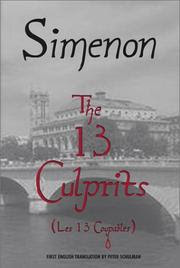 The short stories making up The 13 Culprits collection are tasty little snacks. Despite the outright revelation of the guilty party by their titles, these imaginative riddles challenge the reader to figure out the why and wherefore of each case. Although very short, averaging just fewer than 8 pages, they are nevertheless packed with information necessary to present the mystery and the clues needed to arrive at the solution. Simenon achieves this by drawing on the fact that his protagonist is an ‘armchair’ detective, a juge d’instruction, an official who directs investigations, interrogates persons of interest, and prepares charges, but not one who is out on the street, gathering evidence and collaring suspects. Thus, Froget utilizes various written documents that typically condense details, limit descriptive phrases, and omit digressive commentary. The result is the stories are short.
The author’s primary device is his investigator’s ever-present “notebook.” Although Simenon has Froget introduce his ‘method’ to the reader by “ticking points off on his fingers” in the first case, in 11 of the 12 subsequent cases, he presents the investigator’s “notes” with pertinent “presumptions” and “proofs,” etc. Froget relies on “small, calm and precise writing” that “borders on an obsession” to list this vital information in an abbreviated, concise form. (By way of contrast, one only occasionally finds Chief Inspector Maigret making notes. And we know how he hates writing reports.) As well, the author employs numerous other devices, such as police reports, newspaper articles, radio transmissions, and telegrams to provide information. Below are some representative truncated texts from Froget’s all-important, ‘telegraphic’ notebook as examples of Simenon’s technique.

Emblematic is the simple note “Motive: land.” This conclusion appears “in miniscule chicken scratch on the margin of his notebook” at the end of an imposter case.

“Presumptions: Concierge’s deposition. Traces of blood. Cut on his hand.” These facts combine to solve a murder case.

“Proof: Mower lost his right eye in prison. Smitt denies seeing him after prison, but she mentions seeing the missing eye.” This fact implicates a murderer.

“Proof: Left for Bordeaux Saturday. Returned the day after the drama. […] Presumptions: Chose where one could sound an alarm. Gun not loaded. Did not need money. Did not frequent that bar.” These details expose a double-murderer.

“Specifics: insults during the argument about women; blows; attempted theft.” This accounts for a bizarre assault.

“Presumption # 3: She acted and answered questions as if she wanted to be accused.” This incriminates a robber.

“Proof: Philippe’s guilt. Pure water in the vial where the poison had been stockpiled.” This traps a poisoner.