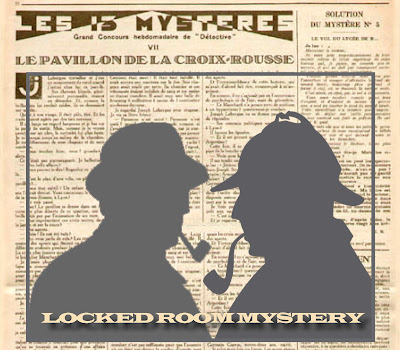 It was a pleasant surprise to discover that very early in his writing career Georges Simenon joined the ‘Locked Room Mystery Club’ that includes big names like Edgar Allan Poe, Arthur Conan Doyle, Gaston Leroux, and Agatha Christie among its prominent members.
As far as I can tell, The Little House at Croix-Rousse (Le pavillon de la Croix-Rousse), a very short story (6 pages) written during the winter of 1928-1929, is the first example. Originally published in two parts under the pseudonym Georges Sim in the weekly Détective magazine during 1929, it was subsequently incorporated into the 1932 collection entitled Les 13 Mystères that features Joseph Leborgne, a detective who works exclusively from the hotel room where he lives to investigate and solve cases.
English translations can be found in several works: 1) Esquire Magazine as The Case of Dr. Ceccioni, 1935  2) Ellery Queen’s Mystery Magazine as The Little House at Croix-Rousse by Anthony Boucher in November 1947. 3) All But Impossible! edited by Edward D. Hoch, 1981. 4) The Fifty Greatest Mysteries of All Time edited by Otto Penzler, 1998. 5) The Black Lizard Big Book of Locked-Room Mysteries edited by Otto Penzler, 2014.
The story opens with Leborgne examining the plot plan of a small house in Lyon 300 miles away from Paris. Six Xs mark the spots where policemen had been on guard in response to an anonymous letter indicating Doctor Luigi Ceccioni would be murdered in his home on a specific night. The police elected to encircle his house without warning “the interested party” because it was a “political matter” involving an Italian exiled to France for practicing more “politics” than “medicine.” Previously rich but now poor, Dr. Ceccioni lived in “lamentable” circumstances. He was alone as a widower with a single son who was off studying abroad.
On the day in question, when Ceccioni went out for his customary dinner, the police officer in charge searched the house, “cellar to attic,” and determined “no one was hiding inside” and “it was impossible to enter except through two doors and three windows, all in plain site from the outside.”
After the intended target returned home at 1:00 am and lighted an oil lamp in his bedroom, no cop “napped” or “left his post” or “lost sight” of the entry points where he was stationed while the chief rounded the house regularly. When the lamp flickered and went out as though it had run out of fuel, the officer in charge picked the lock and led the team in. Here’s what they found: the doctor dead, half-lying on the edge of his bed, fully dressed, still in his overcoat. His clothes were soaked in blood. His hands, also drenched in blood, were clutching his chest over a “6mm bullet hole less than I/2 inch above his heart.” But “no one had entered!” and “no one had left!”
Most importantly, no gun was to be found: “Neither visible or hidden! Not up the chimney or in the gutters! Not in the garden or anywhere!” The windows were all closed and their panes were not broken, so he could not have been shot from outside the house. There was no sign of theft, and all the policemen were regarded as trustworthy.
In short, the quandary was clear: a dead man, inside a locked ‘room’ all by himself, with a bullet hole in his chest, and no weapon in sight. But there were two elusive questions: whodunit?  And how? After pondering the case for a mere ten minutes, Leborgne revealed his deductions to the narrator.
Anyone unable to read this story and interested in obtaining a brief explanation of this mystery could request one through the email contact button on this website: http://www.davidpsimmons.com/