Was this investigator a Maigret forerunner? 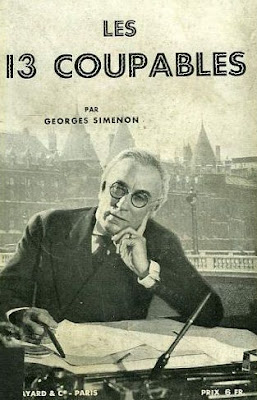 Froget beat Maigret into print by a month. Froget appeared in Détective from 3/13/30 to 6/19/30, and Maigret in Ric et Rac from 7/19/30 to 10/11/30. Maigret came out as the novel Pietr-le-Letton in May 1931, and Froget came out in a collection Les 13 coupables (The English translation entitled The 13 Culprits came out in 2002) in October 1932, with another final story following in 1933.
Since limited images of Froget characterize the stories, assessment of his potential contribution to the developing Maigret is easy. In fact, eight stories provide just a few descriptive words, and six do not provide a single one. The figure of Froget ends up no more than a sketch, whereas the portraits of the culprits he confronts are well filled out. In addition, the author focuses on only a few of Froget’s features and their qualifiers repeat frequently, so a narrowly defined character results.
Here, then, is the available physical image: Froget is “small and thin” in physique. He is an old man, given that his “frozen face, crowned with white hair, could be considered the face of old age.” He stands out for his whiteness: “the white of his flesh, his à la Bressant (a crew cut in front with long hair down the back, a hairstyle popularized by the French actor Jean Baptiste Prosper Bressant in the 1800s) groomed hair, and his starched linen.” And for his blackness: “as usual, he was dressed in black from head to toe.” Thus, whenever Froget resurfaces, “he is black and white, as always.” For example, he is “the judge in black” with his “white, virtually waxy forehead.” In particular, his white hands are prominent throughout. These oft-described hands “of a cold white striped with blue” are delicate, but functional and expressive. With “small, precise movements like a nibbling mouse,” Froget writes numerous explanatory notes in 11 of the 13 cases, using a pen with “a point so fine that, wielded by any other hand than his, it would have pierced the paper.” Repeated references to his “uneven shoulders” underline another distinctive physical feature. With “one shoulder higher than the other,” with “his left shoulder always higher than his right,” this inequality, most likely due to an abnormal spinal curvature, indicates deformity and possibly disability.
Beyond these purely physical features, Simenon describes Froget’s bearing and behavior 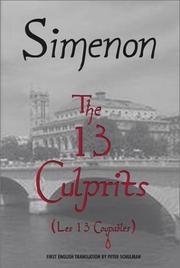 in a similar way, again limiting the portrait to a few categories with minimal but repeated qualifiers. “Rigidity” is a characteristic although one time he “seemed to have lost a little of his rigidity.” Generally “incapable of the least concession to adapting to the social setting,” Froget radiates “an air as little encouraging as possible.” He wears a “concentrated look” on his face, “the face of old age with its immutability and austerity” although he does smile—once. When not “frozen” and “impassive” and “immobile” in his “coldness,” he is “haughty” and “cutting.” He usually speaks “in a professor’s monotone” with an “indifferent” and “level” voice, but sometimes he is “curt” or “brusque” with responses falling “heavy as hail.” So, this Froget is clearly dissimilar to Maigret. However, in one aspect, he is Maigret-like: he is always calm! He looks “calm.” His demeanor is “calm.” He observes “calmly,” talks “calmly,” and acts “calmly.” Here, he “lets his words fall with terrific calm” and, there, he “comes and goes with the same calm he would display out on a stroll for his health.” Doesn’t this sound like the Maigret of 103 tales?