SIMENON SIMENON. HOW IT ALL BEGAN…

About the beginnings of the series with Rupert Davies 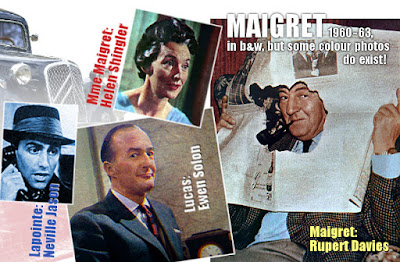 The British Broadcasting Corporation, London, was the very first TV station to discover "Maigret" as a TV subject. That was in 1959, when Georges Simenon had already written about 60 Maigret novels, and the BBC tried out "Maigret and the lost life" as a late night TV pilot project, which succeeded very well, so that a series of TV films could follow. Simenon told his wife, Denise, who was his manageress in those days, to be sparing with TV interests. So, she rejected the inquiry for a following series, and the BBC seemed to be left alone. But, according to Simenon's "Intimate Memories", there was an intermediary, who tried again (and again), and finally negotiations began and a contract was drawn up to be signed in London.
But Simenon himself remained to be reserved about an arising TV series and wanted to check at least the first episode scripts and, later on, to watch examples of the first film results. The executive producer, Andrew Osborn, had to find a new Maigret actor, because Sidney Basil, who starred in the pilot film, was no longer at disposal. Osborn thought of Rupert Davies, who was already known by the TV audience from impressive appearances on screen, for example in the "Sea Fury" series and as "Inspector Duff" in another series. So he asked Davies to play the part of Maigret. Davies, who, so far, had not read a single Maigret novel and only knew Maigret was a fictitious French detective, was surprised. He thought of himself to be a typical Englishman without any French characteristics. Osborn suggested him to read a few Maigret novels and to think the matter over. After that, he was not totally convinced to take that series leading role, which could type him and block him to get other acting parts, although they might be no leading parts, but varied and interesting. He suggested to the producer to visit the author and hear his opinion. So, Osborn and Davies flew to Lausanne and met Simenon. The author, at first glance, was very enthusiastic about Davies. "That IS Maigret! You are the flesh and bones of Maigret!" was his reaction.
That was another unexpected surprise for Rupert Davies, but he remained thoughtful and had to go to the window to have a look out. Simenon was pleased. "That's exactly, what Maigret would do," he commented. According to what I have read in the papers, Davies, at first, remained reserved. He even had to go alone to a nearby café to have a cup of English tea, if possible, and think the matter over again. But he returned and said yes, he could try to take the part. He wanted to know directly by the author, what kind of man Maigret was, how exactly he would handle his pipe and how he would say goodbye to Mme Maigret at the door, when he was leaving for his office at Quai des Orfèvres. During that conversation he noticed the table to be a bit wobbly and asked Simenon for some tools, so he could repair the thing in no time, if there were no objections. Simenon told him, he had a tool kit in every floor of his château, but, unfortunately, he hadn't have had time enough to fix that table leg himself, and, by the way, Davies' intention would be another prove that he simply was Maigret. If Davies actually did repair that wobbly table - I don't know.
A few months later, when some episodes of the very first "Maigret" TV series had been realised, Davies visited Simenon again, with copies of two of those films in his hand luggage. And again he had his doubts, he thought of it to be an "acid test". But, fortunately, Simenon was very pleased with the results, and soon the first season of 13 films could be presented to the TV audience. And it would be up to the audience to decide, if there ever would be a second season.
In that series, which finally had four seasons (a complete fifth season was not possible, because there were not enough Maigret novels, at that time, to be adapted for the screen), Helen Shingler played the part of Madame Maigret. According to an interview Mrs. Shingler gave to a magazine, she was chosen for that role by Madame Simenon, Denise, after she had studied carefully a pile of photos of actresses that were sent to Simenon by the BBC to select one. Georges Simenon had already seen the photos before the decision of his wife, and, what a coincidence, he had the same opinion. Helen Shingler had already been known mainly to the cinema audience, before she won fame as Mme Maigret on the small screen. She could be admired in about 30 of those 52 episodes. Mrs. Shingler as well once met the Simenons and found them very pleasant and amiable.
Sergeant Lucas, the Chief inspector's right hand, is played by Ewen Solon. He got the part by coincidence, but not easily. When there was something like a loose first rehearsal of "Maigret" in the London BBC TV studio, a Lucas actor was urgently needed, and Ewen Solon, at that moment, happened to be present and had his fun being Lucas. Suddenly, the producer came up, and Mr. Osborn really was angry seeing Solon in his team. He knew Solon from other TV productions and from cinema films as well, but he had a different actor in mind for the Lucas part. This led to a short, but loud and intensive word confrontation. Solon did not mince matters thinking he already had lost the Lucas role and would never get it. But exactly because of his unlimited openness towards Osborn, he, already unexpectedly and to his great surprise, won that part! Ewen Solon was to be present in almost all of the episodes.