SIMENON SIMENON. LIKE LIVING IN A CAN OF SARDINES

On the kitchen of a boarding house, a well-built microcosm in “The Lodger” 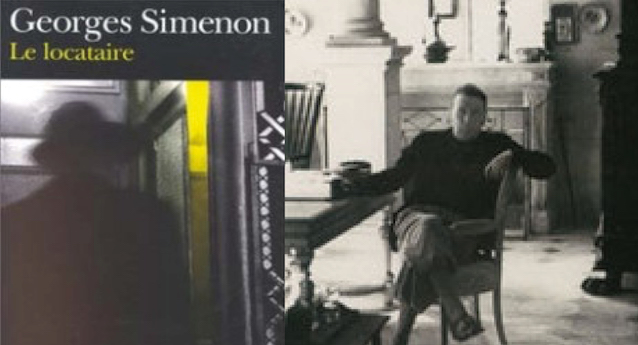 In his deft portrait of boarding house living in The Lodger, Simenon highlights in particular the way “the boarders live in the kitchen!” where “so much life [is] concentrated in a small space.” Beyond the revelatory kitchen intimacy, where the inhabitants are so crammed together “their elbows touch each other,” the quarters elsewhere are so close that eavesdropping by the inhabitants extends widely.
Notably, Georges’ home was a boarding house also, and its boarders influenced him greatly. Besides agreeing ”the lodgers did not live in their bedrooms, rather more willingly in the kitchen, the heart and soul of the house,” biographer Pierre Assouline emphasizes how “their presence diminished” and “humiliated” the adolescent boy’s father, fanning hostility toward his mother. Yet, he did not “totally detest” the lodgers. “Their conversations excited him,” so “he spent a lot of time observing them.”
The novel’s protagonist is a fugitive from justice who “spends his life in the kitchen” and “savors almost complete well-being” there even though it is no bed of roses. At first, Elie “thinks he would be surrounded with respect” and “that pleases him,” but the other lodgers dislike and mostly ignore him. Still, even “if one succeeds in driving him out of the kitchen one moment, he comes back under a new pretext.” It turns out that, among the male inhabitants, “Monsieur Baron is just about the only one to respond” to him even though Elie “has never been so chatty or as lively.” On the other hand, the two women in the house, Madame Baron and her young daughter Antoinette, are more interactive. As clues, news, and facts related to Elie’s crimes crop up, Antoinette is the first in the house to make the connection and her mother is the second one, much more belatedly and always reluctant, to understand.
While sitting in the kitchen with the police net tightening around him, the wanted man surprisingly starts to talk about his crimes and, later on, blatantly lays the latest newspaper article about them on the kitchen table for all to see. As the inhabitants become increasingly uncomfortable, their reactions vary. Some leave the kitchen, some tell him to get out of the house, and one menaces him, but strangely enough, nobody chooses to tip off the police. Eventually, they all withdraw, and “everybody atypically stays in their bedrooms.” On the other hand, as the police close in, nobody makes a move to warn Elie as if now they do want him to be arrested.
Here is where Simenon brings Sylvie, Elie’s oddly indifferent girl friend, herself guilty of aiding and abetting the murderer and robber, back into the story. She arrives to tell him the cops are outside. More upset by the possibility she “denounced him for a reward” than by the reality that “they are coming,” he threatens her with “I’ll do whatever pleases me… And God knows what will please me.” She promptly heads for the kitchen—“the general place of refuge”—to join all the inhabitants. Elie follows and, with “a terrifying calmness” and “a sarcastic laugh,” he asks, “Are you satisfied?” No wonder “the kitchen had never felt so small.” Footsteps sound on the sidewalk. The doorbell rings. The culprit flees the kitchen and runs up stairs. They bring him in handcuffs back down—to the kitchen….