SIMENON SIMENON. THE MOTHER GEORGES HAD NEVER HAD / 1

Madame Baron in “The Lodger” is not like Madame Simenon 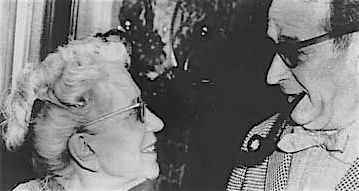 Notably, adolescent Georges’ home became a boarding house for several years and its landlady was Madame Simenon. The way she ran the business, especially how it humiliated Georges’ beloved father, served to ramp up Georges’ hostility toward and conflict with his mother. While reading The Lodger, it was impossible not to interpret the Elie and Madame Baron interaction as a Georges and Madame Simenon contrast. This landlady Madame Baron is the opposite of the egocentric uncaring Madame Simenon. What follows is a listing of her non-Henriette like favorable actions on Elie towards before she actually has knowledge of his awful crimes:
Madame Baron welcomes and treats Elie royally right from the start. “That’s Monsieur Elie’s place! She protested” as she assigns him the all-important kitchen’s place of honor for his very first meal, forcing the others, with that “good place” gone, to find seats at the table “as best they could.” And this comes despite willingly accepting his unusually large down payment and deliberately neglecting to fill out the required registration form for this unknown foreigner without references, the soon to be discovered fugitive.
Madame Baron sets out “serving plates with pink flowers she had never used.” She prepares and presents “some dishes of true appetizers.” She makes a special dessert. The better food, broader menu, and unique staging she offers and repeats create a “spectacle” well beyond what one might expect by merely paying full board.
Madame Baron carefully nurses the sniffling sick man because he has “a cold” or perhaps “the grippe.” She lends him one of her husband’s own clean handkerchiefs. She makes and brings hot grog, along with two aspirin, to his bedside. No wonder “he has no desire to get well.”
Madame Baron seeks to protect Elie in many other ways and her attention is wide spread: first, “You should get out and about; sitting around is what makes you sick” and, later on, “Only watch out to not get frozen.” In particular, her positive response to the fugitive’s important request that she not report him to Immigration Services creates “a voluptuous sensation.” She picks up his bedroom room and practically tucks him into bed. She lets him wear—indeed, probably volunteers—her husband’s slippers. She lets him sit in her husband’s personal, privileged armchair. She “laps up his remarks” and “listens to his phrases like refrains from a romance.” For example, his mention of the “champagne” he is used to drinking “brings sumptuous orgies” to her mind. In fact, “all his words were of a different value” to her. She admires his nice clothes, his rich belongings, and his stories of family living surrounded by seven servants. The summation is her question: “Do you need anything else?”
Most of these actions evoke simultaneous contrast with the way Henriette maltreated Georges. All in all, Madame Baron is plainly the mother Georges never had. As she herself recognizes and explains: “I’m speaking up for Monsieur Elie’s benefit, as if I were his mom.” In sum, there is little about him she does not like, approve, or at least accept (as Part Two to come further confirms).