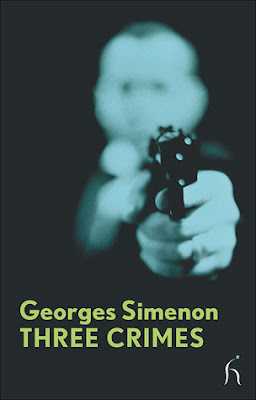 In this work, called an “autobiographical story” by its author, Simenon ponders what factors propelled some of his “friends” during his teenage years into criminal actions. He begins by indicating he will be retrospectively studying eventual murderers through examination of “the front” and not “the end.” That is, he will look for “Why? How? Which way did it begin?” Here is the rogue’s gallery he presents:
Most prominent is Danse who, as a four-year-old, seemed destined for psychological trouble because his mother had him watch a farmer kill a sow by clubbing its head and slitting its throat. Later on, as an adult bookseller, he enjoys taking advantage of his customers, young Georges included. In particular, a “passion for prepubescent females” causes him to “entice little girls” into his “close-shuttered shop” although the autobiographer denies knowing “exactly what he did with their underdeveloped bodies.” Danse is dishonest, “a liar and a half.” A skillful manipulator and a real con man, according to Georges, “he put all of us in his pocket.” Danse progressively displays megalomania and paranoia. He often acts like “a madman” stimulating speculation “he had always been crazy.” He takes up blackmailing until exposed, causing him to flee Belgium for France. There, assuming a false identity, he pimps his mistress to get funds to live on. Already the author of strange poems, he deteriorates into publishing fake interviews and articles of self-praise. His weird behavior is frightening people around him when he commits his major crimes.
Almost as prominent is Deblauwe. He is a slick wheeler-dealer who drags young Georges down, putting drugs in his drinks and taking him to whore houses. Another blackmailer as a newspaper owner, he hires eager young reporter Georges as a front. He is another pimp who abuses his mistress, “making more off her than he earns at the newspaper” by luring students with food and drink to an apartment he rents for her. He moves his mistress into a whorehouse where “a woman who knows how to do it doesn’t have time to breathe” because there she can make more money—for him, of course. When she falls in love with a rival, Deblauwe’s 87 threatening letters get ignored, so he steps up to his major crime.
More peripheral is Fakir, a pretender, swindler, occultist, hypnotist, and palm reader. He preys on those “who were partying and had money in their pockets,” mostly the vulnerable young. He orchestrates drunken seances and orgies. He provides and probably sells drugs, especially cocaine, a material precipitant in what becomes his major crime.
Even more peripheral in Simenon’s presentation is “Little K,” a poor lost soul whose drunken father beat his mother to death, but that’s it for antecedents. He is mostly a drunk until cocaine takes the upper hand, making him a victim, if not a criminal.
Finally, “The Two Brothers” are bit players with multiple misbehaviors described, but little is provided to give insight into what makes them tick.
In the end, hampered by a disjointed style and numbers that do not add up, this ‘three crime’ work falls short of providing expected answers to Simenon’s primary question of whether “pre-established sequences exist for these sorts of destinies.”