Maigret and Pardon examine criminality in “Maigret Defends Himself” 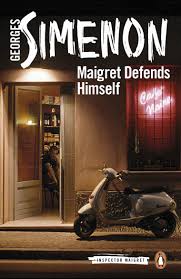 In this novel (recently released in a new English translation by Penguin) during one of their familiar and comfortable doctor’s dinners, Pardon quizzes Maigret about his experience with criminals.
Pardon: “In your career, have you ever encountered a genuinely cruel criminal? […] A clearly deliberate criminal, responsible for his actions, acting out of unmitigated wickedness, through immorality…”
Maigret: “In short, are you talking about the pure criminal?”
Pardon: “Pure or impure... Let’s say the total criminal…”
Maigret: “According to the Penal Code?”
Pardon: “No. According to you….”
Ironically, soon after dealing with issues such as recognizing “evilness” by itself, “judging” criminals, and considering if a crime “matters,” Maigret comes under scrutiny as a criminal himself “for the first time in his career.” In a clever split screen presentation by the author, as Maigret reads the false accusations he faces, he counters with the true facts from his memory of the circumstances. Although forbidden to investigate the claim, there is no doubt he will investigate and defend himself. His recall of Pardon’s comments about “pure evilness” makes him speculate that he may now, in fact, be encountering that exact “vicious” criminal. And, as he plugs away at solving the case, he repeatedly wonders if he is searching for that very villain who is disposed to evilness by nature, “malice for malice.”
Disobedient Maigret gathers information through his associates and informants until his superiors move to shut him down, but not before he has enough to home in on a primary suspect, a dentist. Playing private citizen, Maigret pretends a toothache, and while trapped in the dental chair with the supposed criminal looming over him, his powers of observation and intuition kick in. Aware “every man is susceptible to becoming an assassin if he has sufficient motivation,” Maigret is fearful for his life in the hands of a “truly malicious criminal,” who is also behind the plot to ruin him.
Believing he has met the precise sort of criminal the two friends had talked about, Maigret calls upon Pardon for help. And, being a diagnostician like a policeman, the doctor goes to work and uncovers that the suspect had a major childhood “traumatism”—the little boy had watched two adult soldiers rape his young sister—that “explains all of his behavior” in his later years.
In a combined effort, curious Pardon assists concerned Maigret in apprehending “a conscious perpetrator” of “evil for evil’s sake.” A sexual aggressor, an abortionist, and a murderer, the dentist wrongly thought Maigret was on his trail and so he had engineered a diabolical scheme to get rid of his pursuer.
Simenon points out that “under sufficient exterior or interior pressure, anyone is susceptible to committing acts that law and morality condemn” and, suffice it to say, the author has compassionate, non-judgmental Maigret already thinking at the time of the arrest about serving as a “witness for the defense” at the upcoming trial.