On how Maigret and Pardon, similar yet different, work together 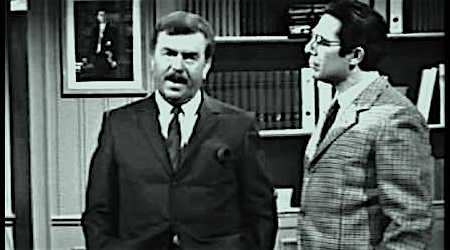 The Maigrets and Pardons dine together twice a month, alternating homes. This “established tradition” ensures the women a “friendly competition” in cooking and the men a serious “tête-à-tête” after dinner. Two such get-togethers in this novel tell a lot about the men and their relationship. Simenon enhances Maigret’s familiar image and expands Pardon’s portrait: the doctor is “not big or fat.” His hair is “brown with silver tinges.” His face showing “signs of an extremely fatiguing life,” the devoted physician “rarely gets through their dinners without a call from a sick person and without having to apologize for leaving.” It seems likely 49-year-old Pardon will never retire whereas 52-year-old Maigret will retire in three years. Because “he was one of the rare people with whom it was a pleasure to spend the evening,” Maigret “really liked Pardon.” Although comfortable together, they share a “restraint” about discussing “certain subjects. For instance, they never talked politics or religion.”
At the first dinner, “naturally taking on his serious, withdrawn practitioner’s air,” Pardon advises his patient and friend to reduce his excessive drinking for health reasons. The theme “to drink less, in fact, to not drink at all” resurfaces throughout the novel with Maigret wondering if Pardon believes “he was on the way to entering the world of old people whose organs become, one after the other, fragile or failing, like old cars whose parts need to be constantly replaced. Only for men, spare parts are not for sale.” At the same time, Simenon reveals Pardon is himself addicted to nicotine. “He smoked cigars at home to please his wife, but once outside he was quick to light up a cigarette.” (Francine worries about cigarettes causing lung cancer, but it seems medical science has not yet accused cigars of the same crime.) Although Simenon highlights the drug dependency of both men throughout the novel, he explains it away casually! After all, “both were men.” Still, the primary emphasis is on Maigret’s lack of compliance with the prescribed regimen and how “he was beginning to get mad at the doctor” for having “advised him to take it easy, implying he was very slowly becoming an old man, soon to be only good enough for fishing in the Loire.”
Struggling with criminal allegations against him and eventually forced out on sick leave because of his efforts in self-defence, the former chief inspector finally and fortunately recognizes a “need” for Pardon’s help. Once asked, his friend leaps up and runs with the ball, effectively completing the now private detective’s investigation. Pardon not only enables homing in on the prime suspect and facilitates an interview with the crucial witness, but he also goes out of his way to drive Maigret—who does not drive—to the late-night rendezvous that clinches his defence. In a touching sequence at their second dinner together, the patient emerges from a typical reflective trance to drink brandy right in front of the doctor. In a state of “admiring curiosity though not exempt from fear,” his loyal, understanding friend—actually his only friend—does not intervene. As Maigret proceeds, he trails an appreciative thank-you: “If I succeed, I will owe it for the most part to you.” And he does defend himself.