SIMENON SIMENON. ALL ABOUT MAIGRET AND HIS DRINKS 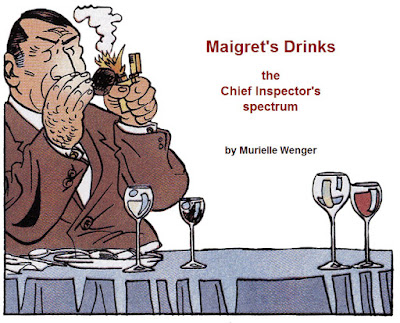 A book by Risto Ranki (a Finnish publication in 2015 and a French translation in 2018) deserves a run in the Anglophone world. The Finnish title translates as Maigret Drinks, and the French, as Maigret and his Glasses. A hope for English translation may appear as Maigret Drinks or Maigret and his Drinks, but who knows when, if at all. In the absence of an English translation of the book, this excellent work merits lengthy description.
Ranki’s clever style transforms a well-documented expositional discourse on Maigret’s long-term proclivity to imbibe alcoholic beverages into a pleasantly readable romp. While presenting his arguments in a light fashion, the author provides numerous citations from selected Maigret works, displaying great familiarity with the texts. Fortunately, refreshing descriptions—e.g. “the case of the cadaver of the homeless man with magnificent hair”—rather than annoying titles and dates identify the sources. Notably, be it in verb or noun forms, “drinks” refers essentially to alcohol. Indeed, the appended “index of beverages” lists over 75 different alcoholic potions. Ranki’s extensive documentation suggests he has probably read all 75 of the Maigret novels, but none of the 28 short stories are cited. In sum, not a didactic presentation or research project at all, it should provide Maigretophiles an entertaining and informative read about their hero’s drinking patterns.
The work begins with some succinct background information about the man who grows up to drink a lot but still spend his life as a mostly sober police functionary. Alcohol was not prominent in the life of young Jules. “Local light white wine” was on the table at each meal, but “that was not considered drinking.” Although the good “example” of his non-drinking father and the tragic “fate” of his dying mother in the hands of a chronically drunken doctor might have made the young Maigret a life-time teetotaler, Ranki submits the older Maigret “chose his own course” to become a man who “almost never refused a few drinks.” Still, he paints Maigret as “humble” and “always a man of the people” whose “territory” was that of “criminals and those around them.” He was a public servant guided by his creed to “understand and not judge” and, although a government official, he avoided bureaucracy throughout his career, “administration never having been his domain.”
Ranki soon asks, “But why does Maigret drink? What are his real reasons?” and his answers follow in the 158 pages ensuing. He presents Maigret as “a man who drinks regardless of place or time and, in general, it is often, a lot, and pretty much everything.” The Chief Inspector drinks “in the line of duty” while out “at work” primarily, and “rarely does Simenon show us Maigret granting himself the small pleasure of a glass on Sunday afternoons or at the end of a day’s work.” In fact, Ranki provides 12 citations that document how the Chief Inspector’s drinking connects to working. Thus, “In the time it took to read the notes, the Chief Inspector drank another glass of beer.” And “Everyone was waiting for him. ‘One moment, driver… I’m thirsty…’ The truth being he still needed time to prepare his oral report.” And another time, “he entered the brasserie, ordered a half-pint of beer, enough to write…”
Also striking is the way communicating and drinking go hand in hand. For example, “using the telephone […] plays a very important role in the Maigret novels,” and Ranki points out that Maigret, lacking radios and cell phones, has to access telephones to communicate. These are most available in bars and eating places as pay phones that require tokens. Not only does one have to buy “a token and therefore a half-pint” to keep the bars in business, but also “telephoning without consuming is considered impolite.” Accordingly, Ranki offers seven examples: “He entered the first bar and ordered, ‘A half-pint. And a token.’ ” And “Maigret entered a rather elegant bar and muttered: ‘A half-pint and a token.’ ” And “Maigret ordered a half-pint while passing through, shut himself up in the phone booth, and called the office.” Yet, it does not always have to be beer, and Ranki’s documented alternatives are wine twice, an aperitif twice, cognac once, and whiskey once.
Ranki goes on to show with multiple further examples how Maigret also drinks when: buying and smoking tobacco, seeing a cadaver, arriving early, having to wait, encountering unlikable people, being alone, fighting off a cold or the flu, simply relaxing, and facilitating sleep. Of particular note is the fact that “the majority of the time he does not limit himself to one glass.” So, it is made clear that Maigret’s reasons to drink are “very diverse” and “each gives its own explanation, whether he is honest with himself or not.” As a matter of fact, Ranki wonders if all these reasons are just “many other pretexts.”  Or, more simply stated, just “a good opportunity to drink.” Stay tuned for more forthcoming material.