SIMENON SIMENON. "THE HOUSE OF ANXIETY"

About a German publication of a "proto-Maigret" novel

Oliver Hahn is the webmaster of a German website, https://www.maigret.de/, a very nice and well informed site, and he latterly wrote a post about a German translation of "La Maison de l'inquiétude", the fourth "proto-Maigret" novel, which has just been released by publisher Kampa (https://kampaverlag.ch/georges-simenon-maigret-im-haus-der-unruhe/). We found Oliver's text quite interesting, and we asked him whether he could translate it from German to English and slightly rearrange it so that we could publish it on our blog. Oliver kindly accepted, and he translated his text with the help of his wife Susann. We are very pleased to welcome Oliver Hahn on Simenon-Simenon. 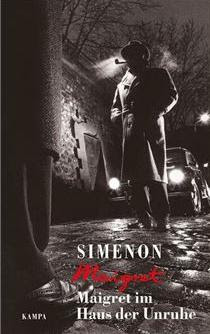 He is grouchy during the investigation, prefers people from Montmartre to high society and reacts annoyed when his pipe is broken. If you think about the characteristic details of the story, there is inspector Torrence assisting him, the protagonist is also working with judge Coméliau, we hear from Madame Maigret, and the Chief Inspector lives in boulevard Richard-Lenoir – yes, then it is probably a true Maigret novel.
If you have already read some other Maigret novels, then you'll notice that Simenon is still experimenting a bit. The Chief Inspector is fat - probably too fat - so he has trouble in pursuing a young man. But at the same time he is battle-tested and his fists are like cudgels. Simenon would not describe his Maigret this way in the following years. And I can not remember that Maigret would have said "Well, great!" later on. Here he still does...
Another interesting aspect is - and will be part of the following Maigret novels too - that Maigret is neither a teamplayer nor leading a team. In the course of the investigation he assigned some missions to inspector Torrence. But you would not find, in the first Maigret novels, the Chief Inspector who is delegating, which is a common practice in later stories in which Maigret usually has a "favourite inspector" to investigate, but others have quite a few things to do. Maigret is still the lonesome fighter and not so much the guy called "boss."
Two, three times I was quite surprised: I had the feeling "Get it! Case settled“, but Maigret went on investigating, because the cases were not settled for him. It was strange for me that Maigret made observations that were important, and that the narrator of the story didn't tell them to the reader. The resolution of the case would be revealed in the epilogue. Yet in later Maigret novels the epilogues are more often a description of how it will go on for the delinquent in the future (he will go to jail, wait for his execution, live happily, etc.).
La Maison de l’inquiétude was first published in L'Oeuvre (March 1 to April 4, 1930), before being published as a book by Jules Tallandier in 1931. This story is the fourth novel about Chief Inspector Maigret, which was not published under the name Georges Simenon. In the afterword of the first German edition, Daniel Kampa details the development of Maigret novels and gives us insights into the three other "proto-Maigret" novels. He pays special attention to the fact that the genesis of the Maigret novels was described by Simenon in a very prosaic way, because they were not published in the chronological order of Maigret's biography.
Anyone who has read the first official Maigret novel, Pietr-le-letton, will realize that some motives in the story of La Maison de l’inquiétude are repeated in the Pietr story. My impression is that this novel, which conceptually corresponds to the very early Maigret stories, can be read more fluently and pleasantly than the Pietr story. Someone who is familiar with the Maigret universe will "consume" this novel with satisfaction and will be glad that there will be a continuation. As an introduction to Maigret's world, the novel will not be disappointing, but I would recommend beginners readers to start rather with Maigret novels of the middle.
Which middle, some would ask? Is there a chronology? No, there's no order and I meant Simenon's midway writing period - the Forties and Fifties- of which you could or should read the Maigret novels. That's why I'm not happy with the introduced numbering and its titling as "cases". I think the numbering just causes confusion. If you read the first case, then you would expect the second case to follow? Simenon didn't write the Maigret novels in this way. For example, you could read a case that is taking place just before Maigret retired (such as L'Ecluse n°1), and notice that there are more than eighty cases (including the short stories) that will follow before Maigret's retirement. The Pietr-le-Letton story is logically case 1. But what about Maigret's first investigation (La Première Enquête de Maigret)? That would be the 30th case. This doesn't make sense.
La Maison de l’inquiétude is the 0th case in the new German edition by Kampa. This raises our hopes for a translation of the other three "proto-Maigret" novels…