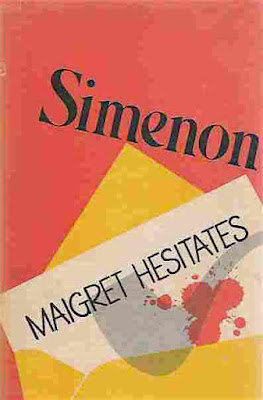 Maigret Hesitates, the recently released new English translation by Penguin, highlights the Chief Inspector’s propensity to call on his medical schooling and continued studying, especially of psychology, during investigations. Early in this novel, Simenon places the Chief Inspector in a lawyer’s library where, tempted “to examine the titles,” he spots many books by psychiatrists he “recognized,” some he “had seen quoted,” and others “he had actually read.”
Attorney Parendon opens a dialogue with the Chief Inspector by asking:  “At what age did you begin to understand people? I mean to say to understand those one calls criminals.” After delving into Maigret’s switch from medical school to the police world, Parendon observes, “I don’t see a duplicate occupation in this change, rather a different outcome for the same personality.” Then the two proceed to discuss the lawyer’s “mania” for the French penal code, which Maigret “knew by heart and had rather often sifted and resifted in his mind, ” The lawyer is obsessed, in particular, with Article 64 that states: “There is no crime or offense when the accused was in a state of insanity or when compelled by a force he could not resist.” Maigret’s comment “I prefer not being a magistrate. That way I don’t have to judge” is revealing and fundamental to his personality. Their ensuing discussion of criminal “responsibility” introduces a subject that recurs all the way to the novel’s end.
An anonymous letter about the impending murder of an unidentified victim by an unnamed killer propels Maigret into studying a cluster of 11 characters in one specific mansion. Aware that “someone in all this wanted to kill someone,” the amateur psychologist “tries to absorb into his mind all these people he did not know the evening before and had just surged into his life.” First, Simenon asks of Maigret, “Hadn’t he, in theory, forbidden himself to think?” and, then, has him think all the time. In fact, the desire to understand “who is crazy in this house” drives him to “devote hours to studying the little world” that includes Parendon, his wife, their two children, and their supporting staff. The double question of  “the murder of whom? By who?” stimulates a personal query for Maigret: “Am I an imbecile?” Yet he does develop useful intuitions about those under scrutiny. As well, he consults a neurologist, who happens to be familiar with the group, and they run the gamut of mental conditions: mania, obsession, hysteria, anxiety, equilibrium, and sanity.
The attention to criminal responsibility expands. When the eventual but not yet exposed murderer informs the detective, “It’s not you who is responsible,” Maigret does feel responsible. Indeed, after the murder he was unable to prevent, he admits the target was “last as a victim” in his mind “of all the household.” His subsequent actions show that he believes he failed. He angrily—and famously—bites his pipe stem in half and then downs a couple of glasses of cognac. Notwithstanding his defensive comment that “the murder was impossible to avoid,” all this happens “without restraint because it was really necessary.”
[What follows is spoiler material.] Noting the Chief Inspector is hesitant in picking out the potential killer, his creator wonders: “would Maigret have felt more sure of himself had he absorbed all the psychiatric and psychology works lined up in the library?” In contrast, the Parendon couple does not hesitate, each pointing at the other. Affirming the killer will be her husband, the wife contends he is “a mental case” and will not be “responsible” for the crime. Later on, after affirming the killer is his wife, the husband contends she is not “responsible” for similar reasons. (Had the two of them discussed Article 64 together?) When Maigret finally becomes certain about the killer after the fact, he dutifully acts and confronts Madame Parendon. She tries to blame her husband, whom she has insisted is “out of touch with reality,” a concept that proves to be far more applicable to her. While she “hammers home” her idea that “I am not crazy,” Maigret “keeps quiet” and the author comments, “What did he know about it?” In fact, the amateur psychologist does “understand” the murderess “had performed a form of transference, projecting her own troubles onto him [her husband].”
In closure, the press asks if the Chief Inspector “has discovered the culprit” and he answers, “I don’t know, my children.” Maigret “was sincere” in this response because, as the book title forewarns, he hesitates to assign criminal responsibility. But Simenon does not hesitate to raise a question about his protagonist: “had he been able to continue [his medical studies], would he have chosen psychiatry?”