SIMENON SIMENON. MORE ABOUT MAIGRET AND HIS DRINKS 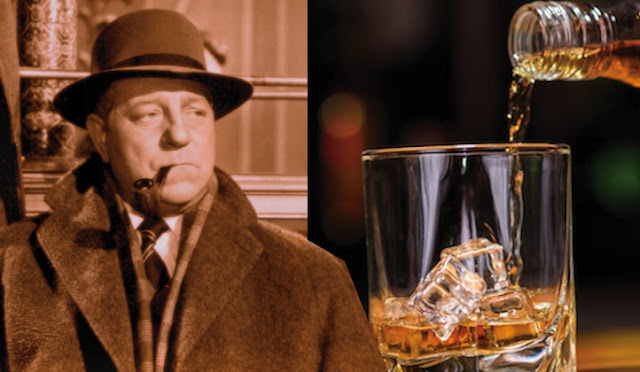 Risto Ranki continues his informative work by next considering the “strong alcohol” Maigret often imbibes, effectively negating any idea that his heavy beer and wine consumption makes other options rare. Pastis is the specific example selected because “its consumption often colors itself with a touch of audacity, defiance, rebellion, and playing with danger.” Accordingly, Ranki serves up 26 revelatory citations about drinking pastis while commenting wryly that Maigret “never spit on any alcohol.”
Stating Maigret “has a regular habit with respect to drink,” Ranki explains how professional “circumstances push him to have a drink frequently” and adds “there are exceptions to this rule sometimes.” For instance, while on vacation away from Paris and Madame Maigret required surgery, “what was there to do otherwise if not eat and drink?” As well, when promoted from “secretary” after his “first investigation,” Maigret drinks so much “sparkling wine” that “when he returned home that night, he was drunk.” Ranki follows 19 demonstrative citations with the affirmation that “most of the time, Maigret admits perhaps he drinks a little too much, but rarely does he happen to acknowledge he is drunk.” Yet, when promoted to the “Special Brigade,” Maigret drinks so many aperitifs that he does concede, “I felt completely drunk and stupefied.”
Looking at ‘the morning after’ next, faithful Ranki provides nine good hangover citations from the series, noting that, for Maigret, “the solution is not very hard to find” and “the damage and its remedy is inside the same bottle.” In balance, Ranki submits that sometimes Maigret “feels no attraction to alcohol,” is even “capable of saying no,” and (most remarkably) “sometimes he remains sober for the very simple reason that there is nothing to drink.”
Ranki advances to look at drinking “on an empty stomach.” Because at home “most of the time, he begins his day with coffee prepared by his wife,” these occasions tend to occur when Maigret is away from Paris. Then, he would often have a drink before breakfast or begin breakfast with a drink. Here are two examples from the ever-present documentation: At one hotel, Maigret “has a drink even before washing up, shaving, and putting on his detachable collar.” Another time, at another hotel, he comes downstairs in the morning, feeling “obliged to drink.”
Ranki then examines the concept of “how beer, in variable quantities, suits all situations” for Maigret, who certainly does have “a reputation as a beer lover.” Be it draft or bottle, local or foreign, he “consumes” it “no matter what time of day.” He actually stocks up on beer when “he foresaw it would be a long time without the chance” for more. Sometimes his thirst is “unbearable,” and “the idea of a beer becomes obsessional.” What’s more, “a single beer is rarely sufficient,” and “the number of beers sometimes reaches 20.” Plus he does not hesitate to mix beer with other drinks, finding it is “very good after wine,” it “attenuates the taste of apple brandy,” and it “is perfect to conclude a long evening when one has had a little too much alcohol.”
Ranki quickly places wine right after beer, indicating how “a glass or two of white wine is almost never refused, no matter the quality.” Maigret’s choice of wine often depends on the moment, the ambiance, the weather, the bartender’s recommendation, what’s listed on the chalkboard, and so on, which 20 references well confirm. In terms of quantity, whenever the Maigrets share a bottle of wine during a meal, Madame Maigret “hardly touches her glass, leaving the lion’s share for her husband.”
Ranki next takes up “strong drinks.” Maigret starts asking things like “Isn’t there anything stiffer in the house?” whenever he needs stronger alcohol to “perk up by giving himself a kick start, clearing his head, or helping him tolerate long interrogations.” 21 examples back this point up. Ranki also links strong drinks to violence and danger inherent to the Chief Inspector’s profession, matters mostly occurring in the early Maigret works. Ten examples show that the drinks are most commonly taken as a “reward.” After a bullet pierces his hat, Maigret quickly asks, “Who [else] wants whiskey?” But he also enjoys drinking with adversaries. After all, “rarely are suspects and the guilty so unlikable” that one cannot have a drink with them. Assorted examples show the policeman drinking with killers, who have shot, knifed, run over, poisoned, and strangled their victims. No wonder “all Maigret readers know about” that bottle of liqueur (be it plum or raspberry based), that reliable relief that is always standing ready in the cupboard when he gets back home.
By the end of this book, it is clear the author has thoughtfully and thoroughly examined Maigret’s drinking precisely the way the Chief Inspector would want: to understand but not to judge. That Maigret has an enlarged liver does not necessarily mean he is a drunk. Indeed, the writer Ranki seems to agree with the doctor Pardon that “Maigret is not an alcoholic.”
One can only hope a full English translation of this excellent work becomes available.