Were the first really much easier to write than the latter? 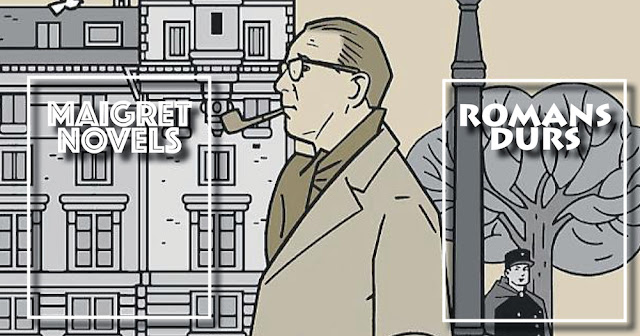 The Maigret novels as a pleasant interval between the exhausting working out of a "roman dur" and that of the next one. This is more or less what the author credited in his statements about the Chief Inspector's investigations, as if he was resting when writing them. The "romans durs" carried him for seven/ten days in the "état de roman", with a creative tension that consumed him up to the point that he loosed almost a kilo a day. And there was also a psychological stress when he put himself into another's skin and lived for a period as if he was this other one. And it must have been really exhausting with the rhythm that Simenon kept. Thus, as he said, he would then begin to write a Maigret novel, because it would be relaxing and requiring a really minor strength.
In the interview with Bernard Pivot, Simenon explained that he wrote the Maigret novel "directly on the typewriter, almost whistling, because it was so easy…"; yet he added: "it became more difficult at the end, because I somewhat confused the Maigret novels and the other ones, and I went further in the depth of the characters…".
This goes to support, at least in part, what we have already expressed. Apart from the serial structure and some rules of the detective novel genre, the style, the characters and the events in the Maigret novels are not really so different from the other novels. It's obvious that a writer like Simenon, however aware of producing two different types of literature, after having consolidated his own style, his specific approach to the plot, a particular method in the building of the protagonists, a personal form of expression, would be unable to overturn everything and express in a different style.
Thus writing the Maigret novels must not have been so easy, as well as in the beginning than in the end. First of all the Maigret novels were a challenge, the way to go from alimentary literature to semi-literature, and it had not to fail. Simenon had also to fight to impose to his publisher Fayard an unusual formula for detective novels, with a so atypical policeman compared to the models that were successful at the time.
Simenon also explained to Pivot that "the first, let's say the first thirty ones, had been just entertainment… When I needed to write but I hadn’t the physical strength to get involved in a novel, because, you know, it requires a remarkable physical resistance. In two and a half of hour writing a chapter with twenty typewritten pages for a "roman dur", it's exhausting, while for the Maigret novels I was strumming on the keys..."
These words said by Simenon in this TV interview, in a prime time transmission, in front of millions of viewers, don't quite convince us. Since the time he had been in Gallimard's team and under André Gide's protective wing, he would define himself as a "true literature" novelist and give more prominence to his "romans durs", trying to shake off the label of a crime writer.
We know that the part of the detective intrigue requires a certain concentration, and it is also difficult and demanding. Not only describing the ambience, telling the general plot and building characters, but also bringing clues, imagining confessions, giving a logical thread to the investigation, motivating the discovering of the culprit.
It's a common opinion that the part of the police intrigue is not the strong side in the Maigret novels, yet besides the fact that the charm of Simenon's style, the appeal of his approach, the beauty of the atmosphere, the depth of the protagonists are important elements in the success of the novels, we must not forget that these novels are a kind of detective novels and the intrigue remains an essential part.