SIMENON SIMENON. THE VERTIGO OF THE TRAMP 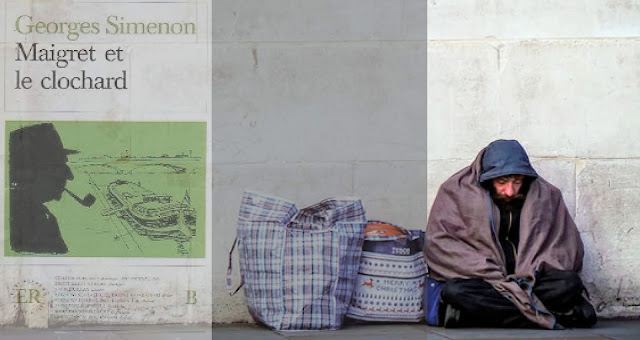 On May 2, 1962, Simenon finished Maigret et le clochard (Maigret and the Tramp). It is one of the most interesting investigations, especially because the protagonist is a doctor who, twenty years ago, left his profession, his wife and his middle-class environment, to live among tramps. It's a key type character in Simenon's works. The tramp is the man who has "crossed the line", as the novelist said, from one part of the society to the other. In the novel, François Keller, who was recognized and welcomed by his community, becomes an outcast, without means, sunk in a life without duties and rights, isolated from everyone. In fact he could be a typical character in a "roman dur", yet we find him in a Maigret novel, which demonstrates that even for characters and themes, especially in the Chief Inspector's late investigations, the distance between the Maigret novels and the "romans durs" got shorter as time passed.
In fact the novelist knew well the ambiance in which the ex-doctor François Keller lived, and he wonderfully described this world and is peculiarities. Simenon had a kind of attraction and repulsion relationship with the world of tramps: "I always had a kind of vertigo in front of the tramp – Simenon explained in a 1968 interview – I'm not so far from considering the status of the homeless as an ideal state. It is obvious that a tramp is a more complete man than we are." For Simenon there was no great difference between a tramp, who was not subjected to social conventions, and the ideal of the "naked man" that he wanted to discover. Thus he claimed that "the tramp is the man who lives without any conceding and who can live in his own truth. I've known many tramps in Paris and I also studied their files at the police Department."
In 1955, Simenon defined the tramp as "a degenerate cousin of the eremite." If we consider that the tramp is the ultimate step of the social ladder, the one joined by the man who has crossed the line, then we can understand why Simenon was attracted by tramps, since he thought it didn't take much to cross the famous border. It needed but an accidental fact, even not serious, but that set off a whole series of events that connected to each other in an involutive spiral, which deprived the victim of his place in society, of money earned in years of work, of the respect from others conquered day by day.
And Simenon did not exclude that this could happen to himself, as rich and famous as he was. "Do you know how many of those that live under the bridges had been professors in universities, doctors, doctors in law – Simenon explained in a 1963 interview with Roger Stéphane –. It's a reality." But the objection that came from many parts was that, at least at that time, becoming a tramp was a lucid and conscious choice, a renouncement to everything in full liberty.
Simenon knew it well: "I met three tramps, one was a professor at Strasbourg, another one was a director of a company and the third one was an old bookseller", and maybe this is what fascinated him in those people that have had the courage to take this step. "The tramp, who lives under bridges, is perhaps the one who succeeds in being the closest to human dignity. He doesn't need anybody. He doesn't need to be reassured. He doesn't need a suit made by a tailor to think he is an important person. He doesn't need titles or anything else. He lies down under bridges with his bottle of wine and that's all. He is the one I envy most..."
Here is fascination, the other side in the mundane, famous and rich Simenon, in a life full of satisfactions, but also obligations and conventions. The tramp is the closest to the "naked man", he has no superstructures, he doesn't have to interpret a role, and he has no reputation to defend. He is himself, without screens, masks or filters. He is as he is.
"I often wish to realize this dream of liberty, sacrificing all I own and I wouldn't be unhappy to find myself in Place Saint-François without a penny. But because of my children, of course I have no right to do it…" A sense of responsibility? Of course. But the "vertigo of the tramp" remained always lurking in him.