SIMENON SIMENON. HIS LITTLE DOCTOR AND HIS CHIEF INSPECTOR

The fourth story in which Dollent rivals Maigret. 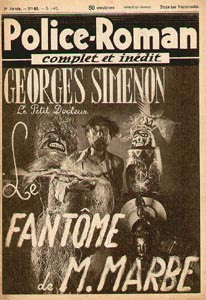 In The Haunting of Monsieur Mabre, Simenon has his doctor/detective respond to a written stimulus to his passion for enigmas—and to the $5000 retainer check accompanying it—by driving 600 miles to take on his next case. Now, fancying himself a bona fide professional detective and seeking to impress Anna (his quasi-double Mme Maigret), Dr. Dollent dumps his patient responsibilities onto Dr. Magné, a perhaps too magnanimous colleague. One can imagine Maigret acting the same way.
Weird old man Mabre reports someone has been ransacking his home, a fancy country villa oddly chock-full of bric-a-brac, in the middle of the night twice a week for the past three months. He’s never spotted the invader, but not believing in ghosts, he’s purchased a revolver and taken up shooting at bottles, lit up by s flashlight in the dark of his cellar. Mabre’s grown-up but ungrateful son shows up out of the blue and hauls away his previously unwanted childhood toys, all of which his eccentric father has lovingly saved. A light bulb turns on in our sleuth’s head and sends him running off into town. There, with the help of three quick pink gins, Dollent’s particular talent for intuiting the truth (or is he deducing it?) enables him to expose the elusive ghost.
In fact, three criminals are involved and, in another demonstration of his Maigret-like compassion, Dollent lets them all go free. The realization that one of them thought he was just a bumbling amateur is a big blow to his ego, but he softens it by cashing the $5000 check.
The Little Doctor also redisplays a phenomenon similar to the Chief Inspector’s well-documented trances. For him, however, they’re more of an excitation. During an investigation, whenever a bizarre, improbable idea comes into his mind, Dollent seizes it and pursues it with Maigret-like doggedness.
Dollent also feels “forced” to consume alcohol whenever he’s investigating. (We don’t know yet if he drinks when he’s practicing medicine.) Thus, in this one-day case, there’s midmorning cassis, a before-lunch aperitif, lots of lunchtime wine, and some after-lunch brandy. Sound familiar, Maigretphiles? At least after his three afternoon pink gins, he refuses a fourth! I continue to wonder why Simenon makes this trait so prominent in both of these two crime solvers.
For a last observation, in contrast to my dissatisfaction with some other translations of Simenon, I find Jean Stewart has so far been doing a great job of translating these Little Doctor stories.