More on faithful translations in the Maigret stories. 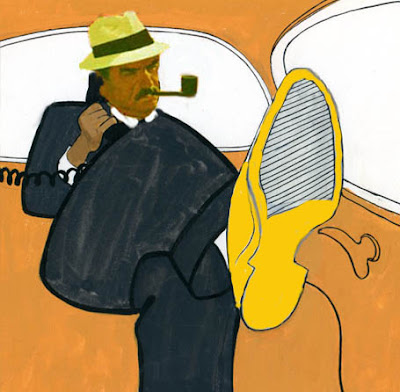 Yellow shoes appear elsewhere in the Maigrets.
Yellow goose dung shoes (souliers jaunes caca d’oie in French) help a bad guy stand out in La Première Enquête de Maigret. Fortunately, in Maigret’s First Case, translated by Robert Brain and published by a British publisher, these shoes remain yellow, unlike the bizarre change to brown seen in The Man on the Bench. Brain chooses goose-dirt over goose dung, but dung or dirt, both are yellow, so he got that part right.
In contrast, some yellow shoes crucial to the plot in Au Rendez-Vous des Terre-Neuvas don’t survive. In the recent English translation, The Grand Banks Cafe by David Coward in 2014, they become tan! For example, The Tan-Coloured Shoes entitles an introductory chapter whereas Les souliers jaunes, whose literal translation is The Yellow Shoes, heads the original. While these shoes remain unequivocally tan throughout the book, notably in The Sailors' Rendezvous, the earlier translation by Margaret Ludwig, mon ami M Google found yellow shoes 12 times. Ludwig stayed faithful to Simenon, but Coward pulled a switcheroo. Was his reasoning similar to that behind the odd brown to yellow conversion in The Man on the Bench?
These changes are what they are, for better or worse. The important thing, once again, is not the color itself, but the distinctiveness of the color. The knowledgeable Maigretphile Murielle Wenger points out that translators can choose concrete or symbolic expression, depending upon what they wish to evoke for their readers. To my mind, in the yellow shoe matter, the shock (le choc) should override.
For a good example of this effect, I shift out of the Simenon/Maigret genre to a contemporaneous work: the 1954 Les Mandarins by Simone de Beauvoir. A couple celebrates the end of WWII in France with a shopping spree. Both buy “aggressive yellow shoes” (souliers d’un jaune aggressif) and parade in front of some bare-footed street urchins. In French, when aggressive qualifies a color, it means a color that ‘offends good taste by being provocative.’ I suspect Simenon in the same way opted for yellow in his three books cited above.
And by the way, I’m not sure if it’s worthwhile to harp on why fantôme becomes Apparition rather than Phantom in Maigret’s Apparition (Maiget et le fantôme), but I may yet.