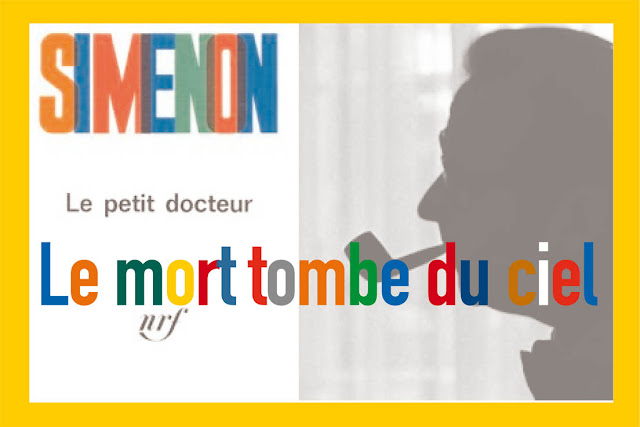 In this sixth story from Simenon’s collection, The Corpse in the Kitchen Garden, the Little Doctor evolves in several different ways, all outlined after the summary below.
This case involves a barehanded man stabbed to death, a bloody knife on the ground, and some blood splatter on one wall of an enclosed garden at a country mansion. It’s as though ‘the dead man dropped from the sky’ as the French title, Le mort tombe du ciel, emphasizes. The corpse of an obviously poor and emaciated old man is unidentifiable because he wears clothes stripped of labels and carries nothing but a note stating precisely the day and time of his death and a one-way train ticket to his final resting place.
Martine, the young woman who hired Dollent to investigate, thinks the man might be her father. However, she has never seen him because, when she was born, her mother died and her father ran away. She lived with her adoptive uncle Robert thereafter because her father Marcel ended up in a mental hospital in Africa, where a fire had consumed him a few years previously. Sensing Marcel may actually have survived, Martine suspects Robert lured him into the garden and killed him.
Our sleuth runs into mysteries in bunches: a measuring tape, a line of stakes, and a freshly dug hole in the garden; a collection of stamps and receipts for money orders from all over the world; and aloofness, disrespect, and obstruction from Robert. Nevertheless, our hero plugs along and eventually deduces surprising but convincing explanations for each and every one of these mysteries.
So, exactly what changes in the Little Doctor crop up in this tale? Dollent seems to be evolving under Simenon’s pen from a simple unselfish server of man to a complex self-aggrandizing egotist. 1) He becomes more aggressive as though his detective triumphs have nourished and strengthened his confidence. He unabashedly uses lies, flattery, bribery, and blackmail to accomplish his goals. 2) He becomes hypersensitive to the frustrations and criticisms he encounters and reacts by drinking even more than he did in that seemingly essential corollary to his detective role. 3) His self-serving pleasure in showing others up becomes more important than his more altruistic satisfaction in solving the case, the primary reward he had enjoyed in the first five cases.
Simply put, in this tale Jean Dollent is no Jules Maigret. Curiously, at the same time, his housekeeper Anna, upon whom he depends so much, is not the Madame Maigret she seemed to be, given the way she chastises our doctor/detective for making money by solving crimes rather than caring for patients.