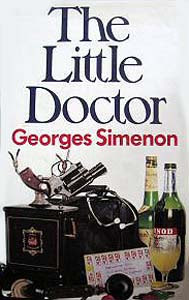 In this ninth story of The Little Doctor collection, The Trail of the Red-Haired Man (La piste de l’homme roux), a redheaded, freckle-faced, blue-eyed man rushes from Paris to Dollent’s office with a tale of woe and a plea for assistance. In a “love at first sight” adventure, a seductive vamp has lured married Georges Motte to a promising assignation in her apartment where he discovered a man stabbed to death instead. Dollent takes the case on, with a proviso: Motte must stay in a locked room at his house with housekeeper Anna serving as warden.
Having thrown the gauntlet down to Inspector Lucas in Paris, Dollent backtracks the distinctive-looking redhead to the crime scene and moves ahead from there to solve both a murder and a robbery. Once again, he uses the combination of reasoning and intuition that has earned him the reputation throughout France as “a puzzle-solver.” He not only explains the mystery baffling all, but also fingers the guilty he has never seen.
This story features many clever twists, but its strength lies is the evolution of some familiar characters: first of all, housekeeper Anna’s role is enhanced. She’s not as much the Madame Maigret she seemed to be in the beginning of the series. When Motte arrives, Anna is “unable to contain her curiosity” to learn his story, so she eavesdrops at the office door. Louise would never do this. In addition, reminding the Little Doctor of how she “looked after you like a baby,” Anna complains strongly about his behavior. Louise would never do this. Anna threatens to quit: “When you get back, I will hand in my apron!” Louise would never do this. Anna takes advantage of “an angelic voice” to prove her points, which “exasperates” Dollent. Louise would never do this to Maigret.
Second, Inspector Lucas, the most common foil to our budding detective, finds their competition is nowhere as playful and friendly this time around. In fact, whereas Lucas had been the teaser before, now it’s Dollent’s turn to manipulate. By not revealing Motte as his source, the Little Doctor “stuns” the Chief Inspector with his ‘sixth sense’ about the crime, the redhead, the vamp, and the time of the murder. After Lucas rounds up 18 redheads in Paris only to discover the crucial 19th is back in Marsilly, he resents Dollent’s “audacity” and all this double-crossing infuriates him no end.
Lastly, our doctor/detective shows he is not totally ethical. Dollent pretends to be a policeman and a claims adjuster. He resorts to bribery to get information. And this time, instead of being the cocky investigator we have come to know, he is extremely unsure of himself. In fact, he’s “so insecure” and “so afraid” he gets totally drunk (thanks to seven brandies). More characteristically, when he awakens from his stupor to praise for his success, he celebrates “one of his most pleasing achievements, for it embodied pure psychology” with—you guessed it—a beer! So, Simenon has fleshed his main characters out very nicely, and there are still four more stories in the collection to come.