A discussion of a great book that came at the very end of the series. 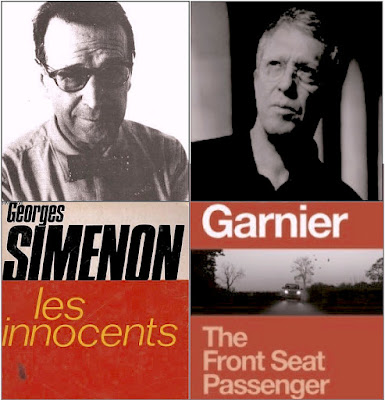 The recent process of comparing Pascal Garnier and Georges Simenon uncovered two works with common central threads: a husband loses his wife in a vehicular homicide, only to subsequently discover she was leading a separate life unbeknownst to him. In Garnier’s The Front Seat Passenger/La Place du mort, Fabien Delorme’s wife dies in a car accident, and in Simenon’s The Innocents/Les Innocents, Georges Célerin’s wife dies in a truck accident. It turns out, however, that discovering their unexpected secret lives triggers an entirely different reaction from the two protagonists in a sort of bad guy-good guy dichotomy.

Célerin lives “in his own kingdom” of happiness. He is totally content making jewelry in his workshop or being at home with his wife, children, and housekeeper. “Nothing dramatic had ever happened to them as a family” until his wife’s sudden death raises a somber question: “Was his own life not over too?” Because he feels so “empty,” but also feels “very calm,” Célerin begins to rebuild Annette in his heart and mind by reliving their twenty years together. In fact, through this step-by-step recall of the past, his wife becomes “closer to him than she had been when she was alive.”
At the same time, because he “needed to understand,” he analyses his recollections, finally realizing that “in all their twenty years together he had never really known her.” Many questions torment him: “Had he really succeeded in making her happy?” Why didn’t she talk to him? Why didn’t she like being at home? Was her working “a means of escape?” Was her workplace a “refuge?”
To find the answers, Célerin first goes to the office from which Annette’s social service cases originated, where he confirms that, every day and all-day long, she devoted herself exclusively to her clients in a compact poor section of Paris. Next, he goes to the fatal accident scene, which is quite oddly located on a street in a well-to-do neighborhood. A knock on the door of the luxurious house from which Annette had run to her death summons a typical all-seeing, all-knowing French concierge. She reveals more than Célerin wants to know: Annette had been leading an unabashed life there for the last eighteen years in the company of another man.
Confusion dominates his brain: hate, jealousy, rage, and depression. Murder, suicide, or resignation? After days of suffering, Célerin concludes he has “to learn to think and behave differently.” He reasons that, since he had made himself “a stranger” to his wife, “it was on his account that Annette had been forced to live a lie.” Indeed, because of his actions alone, Annette had “died twice over.” As a result, Célerin accepts his fate, with full knowledge he will not be able to reconstruct his prior “state of almost childlike euphoria.”
According to Kirkus Reviews, Simenon studies “big white lies in little grey lives” in his long line of romans durs. At the ending of this book, the last of the series in 1972, one senses a somewhat silver lining exists in the dreary cloud above Célerin. This ordinary but good man will take up his “harmless, uneventful life” again―even if destined to never be truly happy.