A combination of three frequently reappearing themes in Simenon’s works. 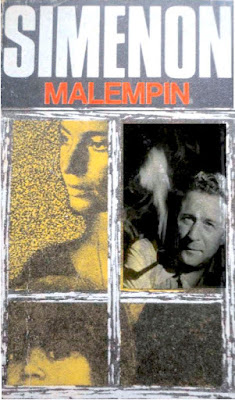 With The Family Lie (1978), which is the English translation of Malempin (1940), Georges Simenon challenges the reader with three interwoven topics: memory, mystery, and medicine. The resulting complexity likely explains why this novel is not as popular as many other works.
Little boy Bilot is so sick in bed he cannot talk. His questioning stare drives Edouard Malempin to recall his childhood experience of staring at his own father beside his bed. This visually triggered remembrance resembles the Proustian ‘tea-soaked madeleine’ phenomenon. For days, Edouard plunges into his past and resurfaces in the present. Vivid but uncertain childhood memories haunt young Edouard as he tries to fathom the roles his father Arthur, his mother Françoise, and his aunt Elise may have played in the sudden disappearance of his uncle Tesson.
Memories, typically fragmented and incomplete, run wild from beginning to end in this book. “Somewhere deep down within my memory, I have a similar long-standing recollection.” Edouard remembers a lot, but not everything, and it is often unclear. Is this unreliable recall or unconscious denial or both? How experiences within the family milieu form a child into an adult is under scrutiny here. Later on, Simenon and Maigret will discuss the role family played in what they became. “I believe I come from the [family] roots that produce the greatest number of failures.” (Maigret’s Memoirs 1951.)
Mysteries develop as Edouard sits beside Bilot, revisiting the past and writing his observations down in a notebook. Uncle Tesson was a mean, rich old man married to a sensuous, greedy younger Elise. Tension abounds between the Malempin and Tesson families. With the former owing the latter money, ashamed Arthur hates Tesson and desires Elise while snobbish Françoise resents him and despises her. Edouard keeps on wondering why Tesson suddenly disappeared. Dead? Murdered? If so, who did it? Father? Mother? Aunt? Was it a group conspiracy? With Tesson gone, all three become calm while Edouard suffers, silently suspecting, but not knowing, what had happened.
Medicine―diseases, patients, doctors, and procedures―colors most everything and regularly runs the plot. For starters, Simenon makes a doctor his protagonist and narrator. Sickness keeps Doctor Malempin at his son’s bedside, where he can do very little except ruminate and write. Just like Bilot, young Edouard was prone to illnesses that kept him home frequently, where he “observed everything” and “recorded everything” in his “enormous head.” (Numerous references to cranial size suggest both a developmental medical disorder and a brain enlarged by thoughts.) In fact, multiple diagnoses (diphtheria, croup, whooping cough, influenza, asthma, measles, impetigo, eczema, etc.) and many treatments (injection, vaccination, intubation, dilatation, etc.) dot the plot. Since this terminology can be confusing, having a simple medical encyclopedia for laypeople at hand will assist those who chose to tackle this work.