SIMENON SIMENON. “MAIGRET AND THE OLD LADY: INSPECTOR MAIGRET COMES OUT ON JULY 7 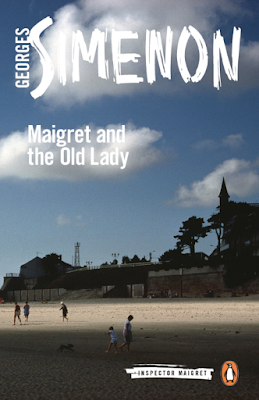 Maigret and the Old Lady, Penguin’s English translation of Simenon’s Maigret et la vieille dame will be available through Amazon in the UK as of July 7, 2016. Both paperback and Kindle editions are expected. (An audio version from Audible.com is not yet visible on the horizon.) Preorder options already exist, so one does not have to ‘wait’ to get onboard. The preorder prices are £7.99 and £4.99 respectively. The opportunity for delivery to the USA will appeal to some because paperback and Kindle editions from Amazon.com will not be available until February 28, 2017. Taking the UK option adds a cost of $10.15 and a transatlantic trip of 7 to 10 days to get the book in hand.
A projection on the book’s availability to Anglophones from other Amazon sources throughout the world follows in alphabetical order:
July 7, 2016: Australia Kindle; Brazil Kindle; France Kindle; Germany paperback and Kindle; India Kindle; Japan Kindle; Italy paperback and Kindle; Mexico Kindle; Netherlands Kindle; Spain Kindle.
February 28, 2017: Canada paperback and Kindle; France paperback; Japan paperback. Note: China unknown.
Maigret et la vieille dame originally appeared in 1949, but the English translation (Maigret and the Old Lady) did not appear until 1958. Its translator was Robert Brain then, and now the translator is Roz Schwartz. Be aware the ISBN-13 for this new edition is 978-0241206829.
This work is the 60th in Simenon’s original order of publication and the 33rd in Penguin’s modern series of translations. I enjoyed the book for the way murder, robbery, poisoning, and shooting unfold in a complicated society at a simple seaside village. Indeed, Maigret shows himself to be a complex character even as the by-the-sea setting evokes pleasant memories.