On wondering if Jules Maigret and Auguste Dupin are alike 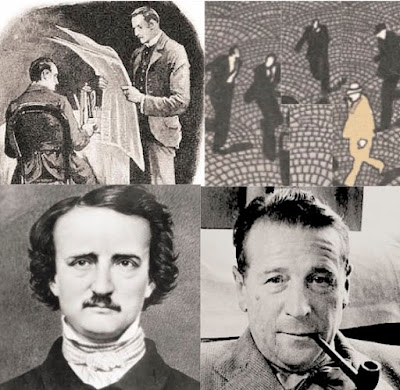 Detective C. Auguste Dupin originally appeared in Edgar Allan Poe’s The Murders in the Rue Morgue (1841). Putting aside the question of whether he is the first detective to ever appear in a fictional story and where the tale fits into the chain of locked door murder mysteries, reading the story does reveal some interesting similarities and differences between Dupin and Maigret. Projecting that the former may be less familiar than the latter, here are some of the similarities:


1) Dupin is a Frenchman. The narrator emphasizes a deep interest in “that candor which a Frenchman indulges….”
2) He displays compassion for criminals. Dupin reassures the accessory to the horrific Rue Morgue murders: “My friend… …I pledge… …we intend you no injury.”
3) He likes to prove the falsely accused are innocent. “It was only after the announcement that Le Bon had been imprisoned” that he pursues the case.
4) He shuns the limelight. “It had been many years since Dupin had ceased to know or be known in Paris.”
5) He goes into trances when analyzing crimes: “I have already spoken of his abstract manner… …His eyes, vacant in expression, regarded only the wall.”
And here are some of the differences:
1) Dupin is not a professional detective. Independently moneyed, he “managed, by means of a rigorous economy, to procure the necessaries of life, without troubling himself about its superfluities.”
2) He is of a high social class. “This young gentleman was of an excellent―indeed of an illustrious family.”
3) He is an eccentric recluse. Basically anti-social, “he ceased to bestir himself in the world.”
4) He is an intellectual. “Books, indeed, were his sole luxuries.”
5) He is brilliant. His “peculiar analytic ability” includes reading minds, recognizing details, correlating information, and then presenting deductions that demand close attention to follow his thinking.
Curiously, while comparing and contrasting process like this, it becomes apparent that the way these two detectives approach crime solution is, at once, similar and different. The method involves some blending:
1) Both draw on observation, reason, and intuition in common.
2) The initial step in detection is observing. They employ this equally.
3) Poe credits Dupin with utilizing “ratiocination” and Simenon quotes Maigret with insisting “I never think.”
4) Each use both extensively, but Dupin relies more on reason and Maigret counts more on intuition.
5) In the end, by mixing unequal portions of reason and intuition, each puts himself inside the criminal’s mind to achieve success.