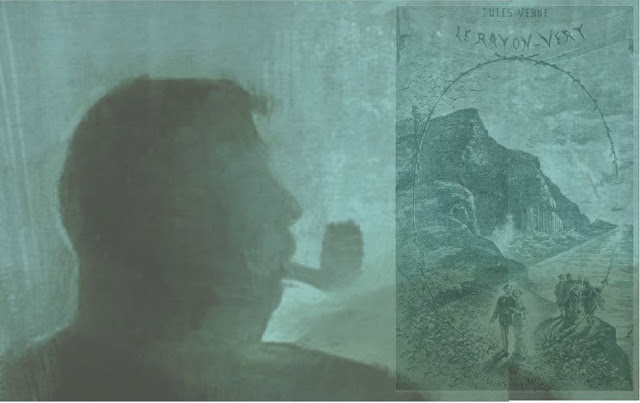 Giancarlo Malagutti’s Sunday drawing of Maigret watching the sun go down evokes a single, specific passage in Maigret and the Old Lady by Georges Simenon: “Maigret obeyed that kind of excitation that drives city people, when they are seaside, to go and watch the sun going to bed…  [and] …be on the lookout for the famous green flash that would spring up from the waves at the precise instant the red ball plunged below the horizon.” Furthermore, Murielle Wenger points out in a Maigret of the Month for Steve Trussel’s forum (http://www.trussel.com/maig/momdam.htm) how the Chief Inspector “perseveres in watching, in vain no less, for the green flash up to the point he made his eyes hurt”
Simenon’s fleeting but powerful reference to the green flash brings to mind Jules Verne’s 1882 novel Le Rayon vert/The Green Ray. Verne’s story involves an oft-thwarted quest to observe the celebrated spectacle that culminates at last in this passage: “Finally, there was no more than a thin slice of the sphere’s top at the ocean’s surface. ‘The Green Ray; the Green Ray!’ cried the Brothers Melville, Bess, and Partridge in unison as, for one quarter of a second, that incomparable tinge of liquid jade suffused their faces.”
This tale is more than just a delightful, romantic adventure story. It also may represent the first time a reference to the green flash phenomenon was made in literature. Indeed, one commentator reports that the book stimulated great scientific interest in the subject as demonstrated by the large number of technical articles appearing shortly after the publication of the fictional work.
Jules Verne stands out as a remarkably prophetic science fiction writer (20,000 Leagues Under the Sea and Journey to the Center of the Earth, in particular, are of this genre). However, The Green Ray is a direct contrast, for dramatic but seldom seen green flashes, which occur as the sun disappears from sight beneath the horizon as magnified images due to atmospheric refraction and dispersion effects, were actually observed long before Verne wrote his novel.
An old Scottish dicton proclaims the green flash is a sign of good weather: “Glimpse you ever the green ray. Count tomorrow a fine day.” Of more pertinence to this discussion, a Scottish legend promises that, “once seen, the green flash protects one from all of life’s disappointments thanks to the magic power it grants to see clearly into one’s own heart and that of others.” The hope of gaining this sort of heightened perception is what sent Verne’s characters traipsing off to Scotland. Perhaps, the same hope kept Jules Maigret out there on that terrace in Etretat, waiting for the flash, until his eyes ached.
David P Simmons
Pubblicato da Maurizio Testa a 03:21