SIMENON SIMENON. THE NOVELIST IN TRAINING

On the young reporter sharpening his pencil for the future 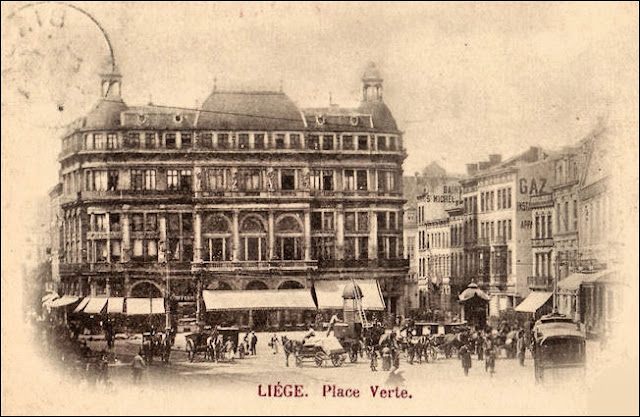 Serving as a “pisse-copie par excellence,” which translates as a writer producing quantity over quality better than all others, the budding reporter made himself “indispensable.” Georges was always ready to write anything on any topic. In fact, his three years as a reporter gave him vast experience, mostly because his subjects were “everything about everything.” He “appreciated all he saw” and so he “perceived and understood” a host of “realities” on a daily basis. At the same time, he was able to develop a style on-the-job well beyond what had been that of a schoolboy.
Within a year of joining the paper, Georges got the chance to write his own regular column. He responded to this promotion, which recognized the quality of his service and way of expressing himself, by churning out 784 installments. Although he was generally careful in their construction, he fell prone to “fabrication.” For example, there was the “Scoop.” The eager columnist published a sensational interview with the illustrious Great War figure, Marshall Foch—that never took place.
Young Georges “did not seem to be familiar with the notion of limits.” While, in general, even the “boldest and most explosive of his choices” seemed to follow some logic, one in particular was and still is enigmatic. Entitled The Jewish Peril, his “crusade against Jews” appeared as 17 articles over 4 months. To be fair, this sustained polemic also included “denunciations” of protestant Anglo-Saxons and Puritans, who apparently were in cahoots with “the Jewish octopus” intending to “decimate the planet.”
One might explain away these articles because the cub reporter was simply doing his job for a “conservative daily affirming its Christian anti-Judaism” or because the undertaking was no more than “a youthful mistake.” But, after asking if Georges was writing as “a convinced anti-Semite or an opportunist seizing his chance,” Assouline answers by building a case for the first choice, pointing out how Jewish stereotypes occur all through Simenon’s works. (This observation is interesting because, while I do recall noting references to Jews in the Maigret series, I do not remember noting how anti-Semitic they were.)
Moreover, by citing a series of anti-Semitic writings and statements, Assouline does not let the mature author off the hook. Nevertheless, Simenon denied all as stated in a 1985 letter: “Those articles in no way reflected my thoughts then or now.” And in another 1985 letter, he wrote: “Thus, I am in no way anti-Semitic.” One might accept some of Simenon’s defenses, which Assouline allows might help “to account” for the novelist, but this “does not excuse or justify” the reporter. In sum, Georges Simenon remains besmirched.
Putting that uncomfortable issue aside, the reporter at age 18 was getting ready to publish his first novel. As the older Simenon would recall, “I had the need to express myself since childhood and felt malaise when I did not do it.” In other words, as he said in a 1981 interview, “One doesn’t become a writer, one is born a writer.”