On Simenon’s first steps in literature and journalism. 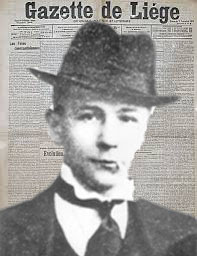 There were early signs that Georges had writing potential. By the time he was eight years old, it was noted that French composition was “the discipline in which he had the most promise.” Neither Henriette or Désiré read any “literature” except for serials in the daily newspapers, but the boarders in their house were mostly students and they fed the young boy‘s passion for reading. Because of their geographical origins, they exposed Georges to many of the Great Russian novelists. Gogol seemed to have made the strongest and most lasting impression, for at sixty, Simenon classified him as “the greatest Russian writer” and “one of the greatest that had existed in the world.” The boy’s scope extended to English authors, with Conrad and Stevenson, in particular, credited as “masters he never abandoned.” Of course, he did not ignore the French. Dumas stood out so much for him that, later on, he chose Aramis for a pen name.
In those teenage years, Georges withdrew books from the Liège library at an astounding rate: “three per day at certain points and sometime twelve at once.” Given the youngster’s voraciousness, it is curious to read Simenon’s words in Paris Match at the age of 83: “I never liked literature. I never really did. I am not an intellectual.”
Academically, by the time he was 12, Georges had “very good grades in French, orthography, and grammar.” (So far, it is unclear what foreign languages Simenon acquired, but presumably Assouline will inform us on this.) However, Georges continued his schooling for only three more years, abandoning his studies then to take another path. Perhaps it was not so much to get away from formal education as it was to avoid returning to the “no man’s land” at his house.
So, the 16-year-old teenager went looking for “a real profession awarded by a monthly pay slip.” Since writing seemed no more than “a fad and sometimes a game” for him, he began as an apprentice pastry chef, but soon switched to working in a bookstore. Finally, having just turned 17, but already armed with his ever-present pipe, he became a reporter at the daily Gazette de Liège, which was oddly enough “the most conformist and traditional” newspaper in the city. There are several possible explanations for why and how Georges ended up (and stayed) there, but if nothing else, the “tolerance” of his new boss towards the “young rebel” was similar to that of his father. What’s more, in another non-translated passage, Assouline extrapolates that the boss, like the father, “had the wisdom not to put brakes on his desires.” Both men seemed to never oppose Georges, preferring to channel him through “broad benevolence.”
Thus, Georges hit this new road running. “At 16, he was already a phenomenon” Indeed, with the good money he was earning, Georges got to buy the bicycle his mother never let him have—finally breaking through her “stubbornness which hurt and marked him forever.” Even while the reporter was racing to research and write articles hour after hour, he was frequenting nightclubs to an extreme and running to prostitutes day and night. Seemingly in response to the inevitable question this whirlwind of activity provokes, the biographer answers: “One has to wonder how he could have lived otherwise.”