SIMENON SIMENON. FROM FRANCE TO THE NEW WORLD

On the circumstances causing his fleeing to North America. 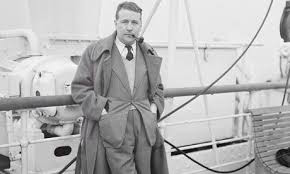 With all that was going against Simenon in France, is it any wonder he might have been considering leaving the country? Despite the ‘closing of the case’ locally in April of 1945, Simenon’s nightmare continued in Paris where he heard he was still being “accused of collusion with the enemy” and he was going to be arrested. Even if it was just a “mistake,” Simenon “judged it revealing of the atmosphere.” Since “journalists and writers” had already “faced the wrath of judicial cleansing” and “others strongly intended to remind of the origin of his [good] fortune,” he saw himself sufficiently “compromised” to be included in that group. Indeed, on May 30, a worrisome “decree” dealing with the “purifying” of “men of letters” was published. “Purifiers” were also targeting filmmakers and publishers.
That Simenon’s brother Christian, a true collabo on the run from his recent condemnation to death, appeared in Paris about this time could only have stirred the pot bubbling with ideas about what to do. By advising his brother to go off and hide in the Foreign Legion, Georges had “saved the life of a man, his brother” when Christian Simenon became Christian Renaud and disappeared in June. Because Georges “was thinking about his own fate, about his insecure situation in France” as well, his counseling gesture to his brother may have helped in saving himself. Cynically speaking, he had aided his own case by getting rid of his collabo brother. Without him around, he could concentrate on his own dilemma.
That his “situation was too precarious” seemed clear and likely played into a growing idea: “to get to America and settle there.” Not just worried about his personal safety, he was also “disappointed by France.” His denunciation had been “way too disgusting.” His house arrest had been “an injustice” and particularly annoying in its forced limitation of his activity.
If the collaboration charges were the primary driving force in his thinking, there were other contributing factors as well. For example, Simenon “dreamed of raising little Marc” there. Plus he wanted to escape the “Red Peril.” According to his wife, he was “influenced by the eventuality of the communists seizing power in France.”
But why did Simenon choose America of all places? Assouline asserts, “It was the writer, more than the family father or the citizen, who made this choice.” The writer wanted to face up with “perhaps the most authentic novelists of the time” on their turf―the United States, where, in his mind, a writer is “a star.”
The Belgian embassy helped Simenon get the necessary all-important visa to Canada, that being easier and quicker to obtain. Indeed, it came just in time because a forthcoming investigation report was “extremely unfavorable” in regard to Simenon, stating that his “attitude was clearly contrary to French interests during the German occupation.” It concluded that his “detestable reputation” made him look like a “Germanophile” and an “opportunist.” Assouline added a summarizing epithet of his own: “Simenonian.” In fact, on August 30, the police asked for an “expulsion order” against him. But it was too late; he had already left.