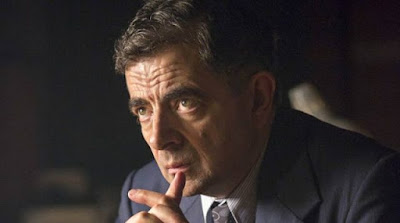 Maigret’s Dead Man, a feature length film, will be shown on television Christmas Day at 9:00 PM. This upcoming work is based on Georges Simenon’s Maigret et son mort, the 56th novel in his series, a book originally written back in 1947 and published in 1948. One might consider reading the book before seeing the film because it’s a complicated story. First translated into English by Jean Stewart in 1964 as Maigret’s Dead Man, it subsequently became Maigret’s Special Murder and, just this year in a new translation by David Coward, it returned as Maigret’s Dead Man.
The film should display a representative Maigret since the book clearly features how the Chief Inspector relies on his intuition and gets into the skin of victims and criminals in the course of investigating. An anonymous man, fearing for his life and begging for help, telephones Maigret time and time again. The calls stop, forcing Maigret to go to work, “following in the steps of his dead man.”
One would also expect the filmmakers to capitalize on the book’s rich material that lends itself to screen presentation. It’s loaded with colorful characters: Jules and, of course, Madame Maigret. His regular associates, Lucas and Janvier. A ‘rival’ of sorts, Chief Inspector Colambani: “He was sometimes thought to be one of the criminals he was looking for rather than the policeman hunting them.” The mystery corpse: “Before or after killing the man with a knife, someone had struck him repeatedly with such violence that his features were swollen, one lip had been split and the whole of one side of his face had been knocked out of shape.” Fred: “He was trying his level best to do what was expected of him as a police informer.” Jo the Boxer: “He was short, thickset, with a broken nose and scarred eyelids over light-blue eyes.” Francine: “She’s a decent piece of skirt.” Nine: “She’s got a squint! She could look at the toes of your shoes and the top of the Eiffel Tower without moving her head!’ The Picardy gang: “They had chosen once and for all to live on the margins. They were wild beasts….” Maria: “She was still beautiful poised next to her [newborn baby] son like a she-wolf, like a lioness, as beautiful as she must have been leading her men.” Monsieur Jean: “He was an even more dangerous wild animal, a brutish beast… a savage in a silk shirt who had been to university and was primped and preened every morning by a hairdresser like some peacock.”
This extensive cast appears in stressful situations in singular settings: a body dumped onto an open square. A post-mortem in a mortuary, for “it was now all about making the dead man talk.” A crime reconstruction on a mannequin. A yellow Citröen with Paris plates to trace. Stakeouts all over Paris: a hospital, racetrack, dance hall, and in particular, a café run by a pair of police plants. A suspect to tail. A street chase. A target gunned down, “shot right under our noses, like a rabbit, in the middle of a street.” A police raid in which “the men in uniform advanced through the streets like skirmishers while the inspectors marched into the disreputable hotels.” More gang shootings in the streets. And so on.
What the filmmakers choose to keep, discard, change, or embellish should fascinate.