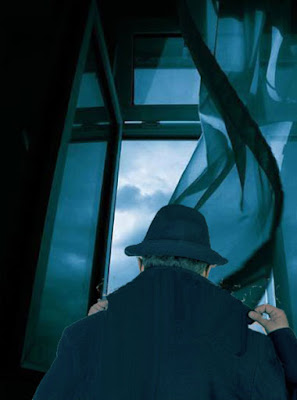 In ‘La fenêtre ouverte’ (‘The open window’), Maigret arrives at 4 o’clock to arrest Oscar Laget, a crooked financier. But, as Maigret is being met by Ernest Descharneau, Laget’s clerk, there is a detonation and Laget is discovered dead in his office, an apparent suicide. Maigret is suspicious: why is a window open in the corridor, when it is a cold day, and why is the smell of gunpowder in Laget’s office stale? Maigret questions Madame Laget and Descharneau, discovering that the latter had been Laget’s superior officer during the war but had subsequently been employed by him after his gun-shop business failed, although he disapproved of his employer’s shady business practices. When he learns from Madame Laget that her husband usually returned at 3 o’clock for a sleep in his office, Maigret deduces that Descharneau had shot Laget in his sleep, then, when Maigret arrived, pressed a button under his desk setting off a firecracker in the open window in the hall. This explained the detonation and appeared to clear Descharneau of any involvement. Descharneau denies all, but hangs himself in his cell.
Superficially, this seems to be a classic detective story in the deductive mould, with Maigret putting together his knowledge of Laget’s routine, Descharneau’s background with guns and the stale smell of the gunpowder to solve the mystery. However, in the space of a few pages, Simenon gives the narrative a significant social dimension and the killer an important motive. Laget’s business activities had started during the feverish economic boom of the early 1920s and although his first business venture only lasted a short time – ‘the chemical products firm lasted three years […]. One fine day Laget shut up shop’ – the prolonged period of expansion created a space in which even inefficient companies could survive, providing they were not too scrupulous in their operations. As Descharneau explains to Maigret: ’At that point there was some talk of prosecution, which did not prevent Laget, a year later, from launching a new concern. […]. Laget would disappear for two or three days, then come back in a state of great excitement by a side door and make me sign some papers: ‘Hurry !...This time we’re going to make our fortunes!...’
Just as the post-war boom provided opportunities for the likes of Laget, the turbulence of the economic situation saw other small businesses, such as Descharneau’s, disappear; Laget’s rise and Descharneau’s fall show the two sides of the coin of a decade in which social mobility was high as a result of the enrichment of some and the impoverishment of others. As Descharneau recounts to Maigret: ‘When we were demobbed I found my shop closed down and my wife ill. I had a little money left and I was unlucky enough to invest it in a concern that collapsed soon after…’ In this financial and social turbulence, it is, paradoxically, the honest man, Descharneau, who finds himself economically dependent on the unscrupulous Laget: ‘I didn’t even know what I was signing. Whenever I hesitated, he’d accuse me of ingratitude, reminding me that he’d rescued me out of the gutter…’
It is not difficult for Maigret to feel sympathy for Descharneau: ’One of those failures who are perhaps the most pitiful legacy of the last war or at any rate its most lamentable victims. A man who had been Lieutenant Descharneau and whose character must then have been above reproach. At the armistice, he found nothing left of his former life. His business was ruined, his wife died. And it was Laget, whose vulgarity and unscrupulousness had worked wonders in that uneasy period.’
In fact, rather than being a “victim of the war”, it might be more accurate to describe Descharneau as a victim of the peace, a victim of the unbridled expansion of capitalism during the post-war boom. And it is Maigret’s understanding of social relations in this period which provides the framework in which his analysis of material clues can point to a motive for the killing and thence to his resolution of the case.