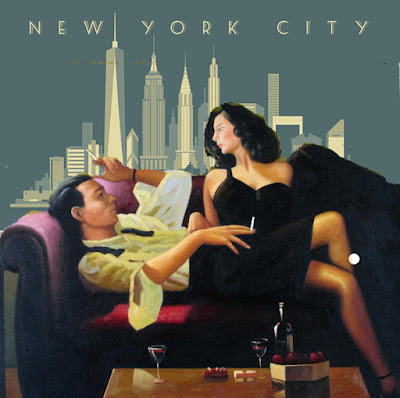 In his biography Simenon, Pierre Assouline outlines some autobiographical elements in this novel, credits Simenon’s “passion” with stimulating it, and cites New York City as “its principal character.” Three good reasons for a read, it seemed to me.
Denise Ouimet reported that, within a few hours of their first meeting, she and Simenon became lovers in a hotel room. As far as I know, Simenon did not deny those facts. Thus, it’s not a stretch to view Frank as Georges and Kay as Denise, and from that, some troubling questions arise. In their second intercourse, Frank feels “a powerful anger” and plunges into Kay “as if he wanted to be done with his obsession once and for all.” She ends up crying “like a child,” stammering: “You hurt me.” Was Simenon “terribly misogynist” as Denise claimed? Later on, Frank “aggressively hammers” Kay to find out how many men she had slept with and reacts by punching her in the face three times. Did Simenon play “champion of justice” like Frank? Did one of Simenon’s women ever assault him for copulating with others? Near the end, Frank betrays Kay, but he excuses his actions and adds a warning: it was “simply because I am a man” and “it will perhaps happen again.” Was that Georges talking?  A final autobiographical question stems from Kay’s continual partaking of alcohol. Was that prescient of Georges regarding Denise?
This is certainly a story about both passion and love. Later on, while writing about the two in a letter to Gide, Simenon asked rhetorically: “Did I express it poorly in Three Beds in Manhattan?” Indeed, Frank had “never imagined such violence in passion, such animality without restriction.” They had “thrown themselves onto each other with a sort of desperate fury.” What’s more, from their first day together on, Frank’s jealousy and distrust consumes him. He obsesses about what men she had breakfast with and who else had listened to “their song” before him. Although Frank “was certain she was lying to him,” he gradually discovers “he had no desire to leave her” and eventually realizes she “was indispensable to him.” Unlike most of Simenon’s romans durs, love and passion win out: they were “two creatures that wandered in isolation for a long time and at last received the unexpected grace of a human contact.” In the end, “they would never be alone again.” When they locked the three bedroom doors and went off, “they were beginning to live.”
A study cited by Assouline of the genesis of Simenon’s novels draws attention to the important “place of action” role for New York City in this book. Although it is a city that always unsettled me, “its brutal and tranquil absence of constraints” seems to have positively intrigued and excited Simenon. Buildings, neon signs, streets, taxis, sidewalks, trashcans, bars, jukeboxes, cafeterias, hot dogs, drugstores and so on keep on popping up in this “great city.” They are “everything a big city could invent to deceive isolated people.” By no means full descriptions, they are more references to objects, nouns with the occasional adjective tacked on. They are just snippets, but they do impact. This book begs to be a movie, but the 1965 French film may be hard for many to view―legally.