On Simenon’s early activities up and down the East Coast 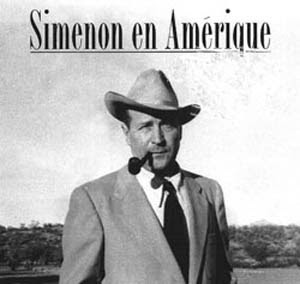 In the summer of 1945, with his wife and son in tow, Simenon left France en route to settling in an Anglophonic country although he “didn’t speak English except for that of passenger ships and hotels.” Remarkably, once he finally set foot in New York City in October, he “behaved like a resident, not a traveler or a tourist.”
Simenon’s first step was to set up a base in a Manhattan hotel, from which he worked to find suitable business representatives. A second clever move was to use Francophone Quebec as the place to acclimatize himself to the New World and, accordingly, he chose to live in a rural village 30 miles from Montreal.
Serendipitously, his search for a secretary in November put him in touch with another Canadian resource: Denise Ouimet. She was 17 years younger than he was, but strong, intelligent, and bilingual, so he hired her. She was immediately a lover, soon a household member-mistress, and ultimately his second wife and mother of two of his children. Biographer Assouline presents Simenon’s description of how he behaved toward Denise: “like a Pygmalion” and “like a Saint-Bernard.” (Translator Rothschild omits this latter comparison.) In describing how Simenon behaved at that time, Denise’s version differs: “He was terribly misogynist.”
Simenon’s “passion” stimulated his first novel in the Americas, Three Beds in Manhattan, but Assouline points out “its principal character” was actually the “megalopolis” of New York City. Before writing the book, the author observed, “New York is not America. It’s the most vibrant, most modern city in it.” A Maigret novel, Maigret in New York, followed “immediately,” presumably in an effort to help him “recover” from his roman à clef.
After six months of living in Quebec, Simenon got fidgety. He switched to a coastal village in New Brunswick for six months, but that didn’t last, either. So, in September of 1946, he piled his entourage (only Boule was lacking) into two cars and trekked 3000 miles down the Atlantic coast, from Maine to Florida. The trip was productive for the writer. He penned 19 articles that reported on “1001 details of everyday life.” While Assouline doesn’t praise them, commenting that the series “seemed to really have been conceived without any intention other than to pay for the gas,” some of them appeared in the newspaper France-Soir in 1946 and as a collection in a book in 2013. (“From Seals to Palm Trees and Rattlesnakes” America by Car had the book appeared in English translation.) Simenon also wrote three novels while living in Florida. He stayed there for almost a year, where he summed the USA up in this way: “There is one thing above all that doesn’t lie. It’s the Statue of Liberty, […] In fact, in the largest and richest country on earth, you will enjoy a liberty that nothing will ever come to fetter. […] Americans, they are free, truly free, in the largest sense of the word, free to think, to speak, to write what they want, to live as they want, and by extension, all expectations, including the craziest ones, are allowed.”
When “an internal voice pushed Simenon to leave Florida” in August 1947, the free man climbed back into his car and headed west.