From Arizona passing through California to Connecticut 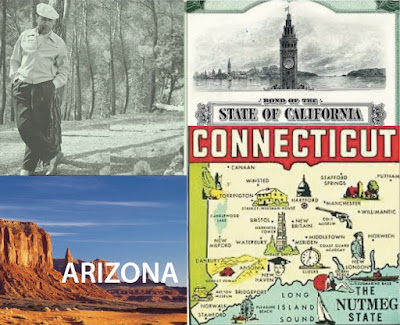 Simenon seemed quite content in Arizona (“It was a little like a deserted island where […] we lived as Robinsons among horses, cattle, an coyotes.”), but that situation did not last. Indeed, 1949 commenced an unsettled period for him as manifested in his moving to three new domiciles in three states in an 18-month period.

First of all, early in January, his live-in mistress (Denise) became pregnant and delivered a second son (John) to him at the end of September. It’s easy to visualize the circumstances of two sons by two different mothers living in the same location complicating his life. Secondly, the business of writing and publishing his books and their film adaptations, including the USA premieres of two films, made the period hectic. Finally, the French purge committee renewed its interest in questions about Simenon’s collaboration during the Occupation. In fact, in July 1949, four years after the war’s end in France, the committee slapped him with a condemnation: a two-year restriction forbidding publication, participation in conferences and radio shows, selling film rights, and/or or profiting from his literary activities. Feeling this “injustice” was one “he could not tolerate” and conflicted about related defense and appeal choices, Simenon pulled up his stakes and moved to California at the end of October. He hoped to “work more peacefully” there and “forget this matter that destabilized him.” However, according to Pierre Assouline, he was not successful nor would he ever be even though by the end of the year the Simenon collaboration matter seemed closed again.
While the family transition to California may sound abrupt, it was rather oddly strung out. Tigy, along with ten-year-old Marc and Boule, had already rented a house in Carmel-by-the-Sea. Six weeks later, Simenon, along with Denise and newborn John, arrived and rented a different house. This effectively established two separate camps, perhaps heralding the coming divorce. Assouline describes Carmel at that time as “a kind of Cape of Antibes populated by old biddies,” but Michel Carly in Simenon, la vie d’abord offers a different viewpoint: “Life became his drug […] setting himself up in the luxury of Carmel villas pleased Simenon.” However, his stay there was short (under six months, 10/31/49 to 6/20/50), for it was Reno, Nevada that Simenon divorced Tigy on 6/21/50 and married Denise the next day.
The newlyweds set immediately to honeymoon in Europe with John (Tigy had won custody of Marc), only to become stranded in New York City. Simenon “procured a map and a DeSoto” there and by early July had picked out a new home in Lakeville, Connecticut. “I opted for Connecticut, where […] I just bought a property, an old farm […] the dream house for a novelist.” So once again, the family lived in two separate camps, effectively cementing the divorce. Simenon with Denise, John, and Boule lived at Shadow Rock Farm while Tigy and Marc lived in a nearby house. The divorce settlement included an unusual requirement: Tigy and Marc must live “within a radius of six miles of Simenon’s dwelling wherever that might be.” A period of unprecedented productivity suggested the new arrangement worked.