SIMENON SIMENON. ON HIS BOOK “THE BOTTOM OF THE BOTTLE”

How a Western adventure cloaks an autobiographical transfer 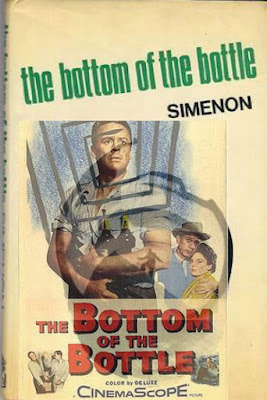 When I learned that Simenon’s 1948 The Bottom of the Bottle was highly autobiographical, this was enough to send me off to reread it. Indeed, Pierre Assouline cites it as “contaminated by that internal upheaval” which his brother Christian’s death caused for Georges. In the least, it does seem to represent a “novelized transposition of his brotherhood.”
Well, to my mind now, Simenon’s introductory disclaimer (“The characters as well as the events related in this work are purely imaginary…”) serves to emphasize its many highly personal elements. When, out of the blue, Donald surprises his brother P.M. in Arizona, it is impossible NOT to think of how, in the same way, Christian surprises his brother Georges in Paris. That both estranged men are escapees who require their brothers’ help to evade their pursuers and they do end up getting their aid is simply icing on the cake.
Both G.S. and P.M. hold the fate of their brothers in their hands. We already know what Georges does, but I will not tell you what P.M. does. Suffice it to say that multiple parallels crop up all the way to the denouement. To cite a few: P.M. is jealous of Donald because his brother draws Nora and Lil away from him. Remember how Christian affected Henriette and its effect on Georges? In addition, P.M. “considered himself responsible for” his brother (as Georges did), and his similar (yet different) attempt to help him compares with that of Georges, which Assouline concludes “saved the life of a man, his brother.” Indeed, as P.M. is driven to act, he acknowledges, “It’s a question of life and death.” Other parallels include P.M.’s egotism (“You are incapable of understanding anybody except yourself.”), his heavy drinking (“Not to get drunk for pleasure, but because he had a real need for it.”) and his fraternal animosity (a “hate unique to members of the same family”). To be sure, there are non-autobiographical items: small ones (P.M. doesn’t smoke a pipe; he smokes cigars) and big ones (in the end, their success is vastly different).


After the autobiographical elements, the literary genre of The Bottom of the Bottle stands out as well. Putting its roman dur characteristics aside, it has stand-alone value as a ‘Western yarn’ likes the ones American boys like me grew up on. Although a newcomer to the country, Simenon gets Arizona right: we have mountains and foothills; canyons and valleys; twisted trees and thorny bushes; cactuses and grasses; barbed wire fences but no tumbling tumbleweed…. Within this singular scenery, we also get wild and wooly West action. For example, in what Simenon likens to “a fox hunt,” the rich rancher and the Mexican cowhand, garbed in blue jeans and cowboy hats, put their hip flasks in their pockets and strap on their gun belts. On horseback in the valleys and in cars on the roads, flashlight and headlight beams dancing under the moonlight and disappearing in the lightning, the posse closes in. Thunder claps, hoof beats pound, and dogs bark. Revolver in hand, the fugitive stands at the impassible ford, trapped by the silent arroyo and the roaring waters. The stallion and mare plunge into the raging river….