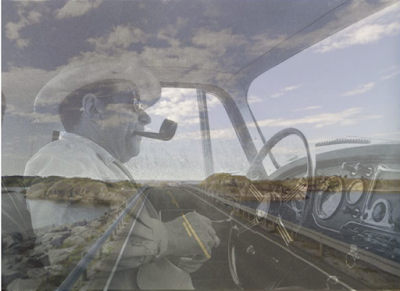 As one continues down the Atlantic coast with Simenon, he drives through a “village about every five miles, a small town every fifty” and lauds each for its “free men” who “form a self-sufficient community and they understand how to manage it according to their tastes.”
“The Indians are so mixed in one has to look carefully to distinguish them from the Whites. Their clothes are the same as those of all poor Americans, and there is an old Ford beside almost every house.”
The drinking laws frustrate our traveler. “Each county votes in the laws which please it,” and “each municipality decides its own regulations.” Where “you can drink,” there are “slot machines and jukeboxes in every corner.”
“Waterfront fairgrounds” and “shops on every corner” proliferate. “They sell everything.”
The hotels in American big cities are “palaces,” but “invaded” by convening “Rotarians, Lions, and Knights of Columbus,” meaning “the poor solo individual has little chance of getting a room.” Discovering “the way to travel American highways,” Simenon says the “trick” is to stay where there are clusters of identical but individual “cabins.” There is “no service,” but one gets hot and cold running water, a shower, and a “kitchenette.” He laments “pre-sliced bread wrapped in wax paper” and “spaghetti and sauce in a jar,” but finds it “healthier than the grub in the tourist restaurants.” So, he concludes, “Long live the cabins!”
After their lawns, Simenon touts the insides of the average American house as impressive, and the kitchen is “what counts the most.” A paradox in “this country where one cooks relatively little,” it is, in fact, “the principal room in the house.” No matter the house, each has “all the modern accessories,” and everything is “white” and “porcelain.”
Another characteristic of American homes is that they “contain very few things, furniture or objects, that are not put to use.” The vacuum cleaner, of course, is de rigueur. So too, is the central heating. There are “electrical outlets everywhere” and “electric devices for everything.” What’s more, “it’s very rare that each family member doesn’t possess a bathroom with a toilet.”
American houses are made of wood. Wife Tigy (in the other car), who is accustomed to the thick, hard stone in Europe, calls these thin-walled structures “houses of cardboard.” Georges cites the advantage that “one can set them on fire before they become historical oddities.”
Simenon doesn’t like the skyscrapers. Each “building is a city,” and  “don’t try to open the windows.” Still, he tolerates them to run the business of writing. He does like the “parkways” because “one doesn’t risk running into cow patties.”
Thus, Simenon switches between admiring and criticizing the “fantasies and contradictions” in this “strange and marvellous country” on “Route One” where “in less than an hour from a city of two million, one [can] fish in empty surroundings.”