SIMENON SIMENON. WORDS FROM HIS “LETTER TO MY MOTHER”/ 1 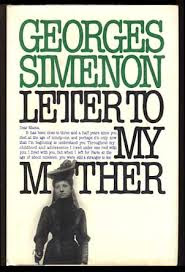 How did Georges actually feel about Henriette? The letter he wrote his mother after her death sheds light on the question. His “Dear Mom” salutation sounds promising, for he adds that “Mother” was what he called her while she was alive. The extracted and translated negative comments that follow will inform:
"Upon arriving at Henriette’s sickbed, the two clearly got off to a bad start, for she “merely” said: “Why did you come, Georges?” Those “few words […] explained a part of what you are” and “weighed upon my heart.”
On always being strangers: “After I left you […] around 19 […] you still remained a stranger to me.” Later, “We are […] like two strangers who don’t speak the same language […] and distrust each other.”
On her persistent distrustfulness—especially of Georges: “You always, as far back as I can remember, were suspicious of lying and attention.” And “You always distrusted everyone and me in particular.” Plus “You always suspected me of the worst wrongdoings.” What’s more, “You always took things for their worst when it came to me.” And “This distrust was always innate with you. But it was me who was the principal object of this distrust.” Plus “This virtually inborn distrust you had of me […] it probably contributed to raising a sort of barrier between us.”
On her facial expression: “There was no emotion there that I could define without risking deceiving myself […] but your eyes expressed […] distrust of the whole world at the same time.”
On her extreme hypersensitivity: “You were abnormally sensitive.”
On her excessive nervousness: “You were a bundle of nerves […] which meant you used to intensely feel the smallest contradictions, the tiniest scratches.”
On her persisting grumpiness: “You were in ill humor time and time again.”
On her domineering nature: “Because you dominate us all […] I have been a stranger to you.”
On her outright cruelty: “It was cruelty on your part” as ”baby Henriette, whose sisters called ‘a bird for a cat’ [= a vulnerable creature], had the audacity to impose her will on grand Désiré. I hated you for that.”
On her lifelong obsession: “You had to provide for your old age. In this fixed idea, there was possibly something pathological.”
On her long-term pretension of poverty: “You made yourself poorer than you were, as if it were a virtue.”
On her unrelenting stubbornness: “If the word “obstinate’ is applicable to somebody, it’s definitely you.” What’s more, “You see that the word obstinate seems to have been created for you.”
On her very existence: “You suffered life. You did not live it.”
On the absence of love: “You know very well we never loved each other during your lifetime. Both of us pretended.” And “There was no true intimacy between us.” Plus “I wonder if you ever took me onto your lap.”